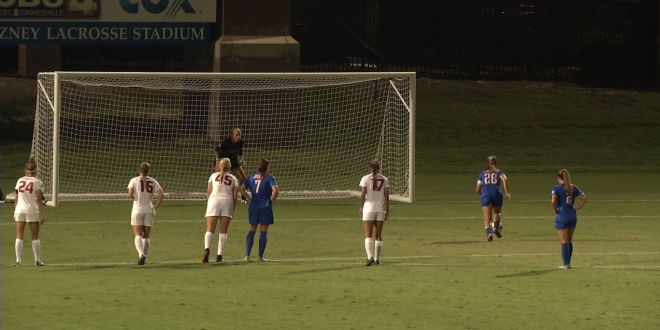 After a long, exhausting match that pitted the No. 15 Florida Gators against the Missouri Tigers Wednesday night, the Gators will have a quick turn-around to play the unbeaten South Carolina Gamecocks in the SEC Soccer Tournament Friday afternoon.

The last time Florida lost was earlier this season against the Gamecocks in Columbia. The game was a tight one that went into double overtime with a final score of 1-0. The lone goal was scored in the 103rd minute off of a penalty kick by Chelsea Drennan.

In the quarterfinals, South Carolina had a come from behind win over Texas A&M, 2-1. After the Aggies scored in the 24th minute, the Gamecocks were led by Savannah McCaskill who scored both of their goals in the second half. Those scores brought her total goals to 16 on the season, which leads the SEC.

Florida’s quarterfinal match against Missouri was a shootout that finished in penalty kicks. After two overtimes, the score was tied at three apiece. The Gators relied on sophomores for offensive production, Melanie Monteagudo scored the first goal to tie the game in the 13th minute and the third goal, to give them a two-goal lead. Sarah Troccoli scored the second goal for Florida. In the second half, Missouri scored two goals within a minute to tie the game. The final result came down to penalty kicks and Florida finally gained the advantage after the eighth round. The deciding kick was placed by Monteagudo, while Kaylan Marckese came up with a save to put the Gators through.

The other semifinal match of the tournament will be between No. 11 Auburn and No. 19 Arkansas. In the regular season, Auburn defeated Arkansas 3-2 on their home field. This match will take place after the Florida/South Carolina game. The winner will move on to the championship game Sunday to face the winner of Gators versus Gamecocks match.

The game between Florida and South Carolina is set to start at 4:30 p.m. on Friday. The game will air on the SEC Network.