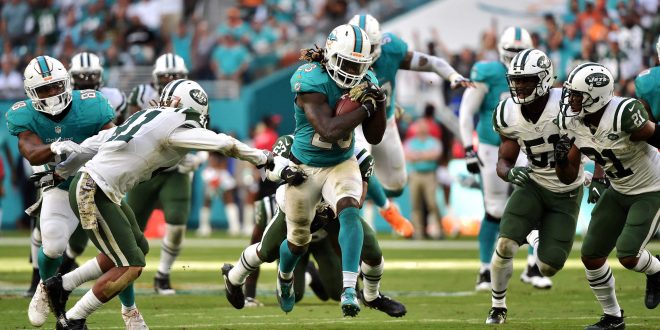 As it looked like it may have been another repeat for the Miami Dolphins starting their season off 1-3, things quickly came to a change. The Dolphins went from looking like they had never played as a team before to a team that looks unstoppable.

Having some rough patches in most facets of their offense, the Miami Dolphins had trouble getting anything going. Quarterback Ryan Tannehill was turning the ball over far too much. They were also giving too many running backs the ball, instead of going with one or two guys to get them a majority of the touches.

Heading into the 2016 season, it was known that Arian Foster was going to be the main guy in the backfield. The former Houston Texan holds the Texans franchise records for rushing yards and rushing touchdowns and attended four pro bowls. He’s always had a history of injuries however, and suffered a groin injury in Week 2 that would change his season and ultimately lead to his retirement on October 24.

It wasn’t until week five that head coach, Adam Gase started giving much of the workload to running back Jay Ajayi. Ajayi was a second round draft pick out of Boise State. It slowly went from six carries, to 13 carries, to 25 carries. In the last three games, Ajayi has recorded 529 yards on 77 carries (6.9 yards per carry) and 207 yards on 19 carries (10.9 yards per carry) in fourth quarters.

This not only has helped the Dolphins immensely in terms of someone they can count on to carry the team, but this has helped them win time possession battles, reduce their turnover ratio, and keep their defense off the field.

Because the Dolphins are running the ball so effectively, the passing game has opened up. Wide receivers Jarvis Landry, Kenny Stills, and DeVante Parker are all enjoying more success. Each of these receivers has at least 15 catches, and Landry is the leading receiver with 49 catches for 605 yards and a touchdown.

Their offense isn’t the only thing that has helped them win games. The Dolphins defense is surrounded by big-name players like Kiko Alonso, who they acquired from the Eagles and who leads their defense in tackles. Byron Maxwell, Ndamukong Suh, Jelani Jenkins and Cameron Wake are the other noteworthy names on defense.

The defense has only allowed 22.8 points a game which is 16th in the league, and is averaging 242.8 pass yards and 136.1 rushing yards allowed per game.

Despite the rough start for the Dolphins, they are on a three game winning streak and look to keep this streak going. They have only lost by double-digits once in eight games and have found their run-heavy distinction.

The past three games they have defeated the Pittsburgh Steelers, Buffalo Bills, and New York Jets. All of these games were at home.

This has helped them improve to second place in the AFC East, behind the New England Patriots. Adam Gase says that they are a very young team, and they still have to focus on each game week by week.  He says that they have a lot of cleaning up to do and he doesn’t want them to get ahead of themselves.

The Miami Dolphins will control their own destiny as the rest of their schedule does not consist of one team above .500. They will travel to San Diego to this weekend to play the 4-5 Chargers. That game will be this Sunday at 4:05.