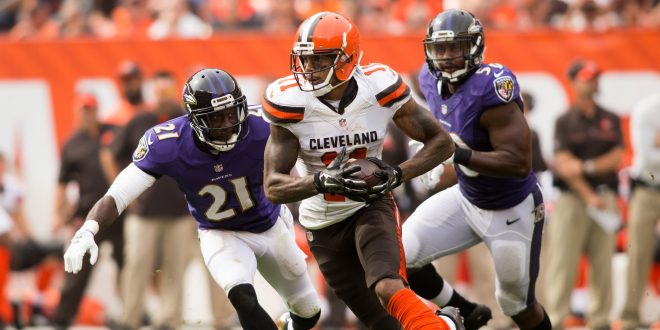 Week 10 of the NFL season kicks off with the Cleveland Browns (0-9) hosting their division rival Baltimore Ravens(4-4) in a primetime Thursday Night Football matchup. This is the 2nd meeting this season between these AFC North Rivals. Last time out, the Ravens were able to squeeze out a 25-20 victory over the Browns in Week 2.  Since then the Browns have lost an unprecedented seven straight, while the Ravens have battled their way back to the top of the AFC North.

The winless Cleveland Browns are without question having an extremely tough season. The Browns have the worst record in the NFL this season at 0-9.  To put it into perspective, the Browns have won only three times in their last 25 games since the start of the 2015 season. One of those wins came against Thursday’s opponent, the Ravens. Basically, there is no where else to go but up right?

Rookie quarterback Cody Kessler is expected to make his seventh start this season. Kessler and the Browns will want to take advantage of their talented receivers in Corey Coleman and quarterback-turned-wide receiver Terrelle Pryor. Coach Hue Jackson and the Browns will look to figure it out and avoid a potential winless season.

The Browns’ opponents, the Baltimore Ravens, have had an interesting season themselves. After starting 3-0, the Ravens have lost four straight games. The Ravens came out of last week’s divisional matchup against the Pittsburgh Steelers with a 21-14 victory and now find themselves in first place in the AFC North. The Ravens will rely on their 2nd ranked defense to suppress the Browns offense. Veteran quarterback Joe Flacco and veteran wide out Steve Smith will look to hurt the Browns through the air and take advantage of the Browns 31st ranked defense.

Kickoff is set for 8:25 p.m. Those looking to find some form of  interest in the game can look to Fantasy Football and check to see if some players on your fantasy team are active.