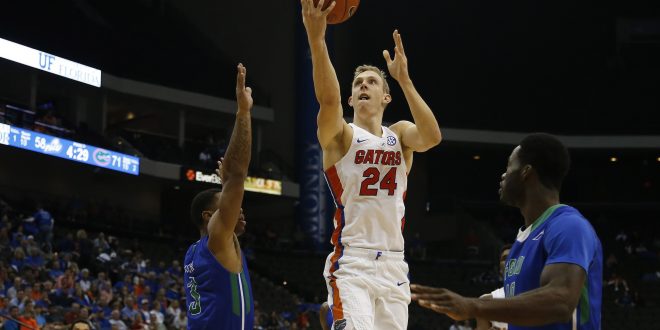 After letting a 15-point lead slip away, the Florida Gator Men’s basketball team was able to bounce back and pull out the win over St. Bonaventure Thursday, 73-66.

The Gators hosted their first ‘home’ game at the Lakeland Center in Lakeland, Fl, a part of their tour of games around the state.

Florida freshman guard Canyon Barry came off the bench with 16 points and five rebounds. Barry helped the Gators to a 60-45 lead with three straight 3-pointers midway through the second half.

Florida Head Coach Mike White said Canyon’s teammates did a good job of getting him open to put up shots, which will hopefully continue as the season progresses.

Even with a 15-point deficit, the Bonnies weren’t going down quietly. They shot their way back into the game, led by guards Matt Mobley and Jaylen Adams. The pair gave the Gators a run for their money, Adams with 20 points even though he turned the ball over six times. White said Mobley was dynamite for the Bonnies, scoring a game-high 28 points.

The team struggled offensively against a team that was physically more dominate than them, despite a significant size advantage. The Gators gave up 15 offensive rebounds and had 17 turnovers. Florida had just a 28-26 advantage of points in the paint and White attributes much of their offensive shortcomings to the Bonnies’ quick hands and lock down defense.

Even so, the Gators were able to fight their way out to a ‘w’. Canyon came in clutch again with a defensive rebound and then hit two free throws.

The Bonnies took the ball down the court and Mobley put up a shot. Gators guard Chris Chiozza came down with the defensive rebound to outlet out to forward Devin Robinson. He then fired it to center John Egbunu who threw down a dunk.

The Gators stopped the Bonnies again, Robinson taking off down floor for back-to-back slam dunks for Florida.

Despite his six-foot stature, White said Chiozza’s play under the basket was much bigger than his actual size and that is exactly what the team needs to improve on.

The Gators are now 3-0 on the season, and will next face Belmont (0-1) in Tampa Monday night.