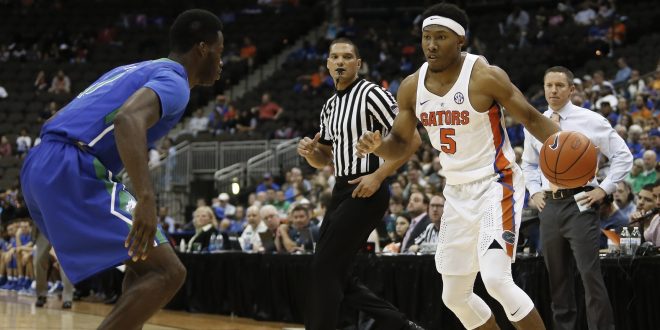 For the second season in a row, Florida will have the opportunity to start the year 3-0. The only thing standing in their way is St. Bonaventure, but the Bonnies are no joke.

St. Bonaventure is led by 2015-2016 A-10 Coach of the Year Mark Schmidt, who is in his 10th season with the program. Schmidt has led the team to three postseason appearances, making the NIT last season, despite going 22-9 in a very difficult conference. On the court, the team is led by Jaylen Adams, the junior guard from Baltimore. Adams averaged 17.9 points, 5.0 assists, 3.7 rebounds and 1.3 steals per game last year as a sophomore. In his only game this season, he dropped 23 points, 3 rebounds, 3 blocks and a steal in a win vs. St. Francis (PA) University. The junior is also deadly accurate from three-point range, shooting 43.8% from beyond the arc last season, and was selected to the 1st team A10 All-Conference team last season. Coach White discussed Jaylen Adams and the team’s versatility as a whole.

St. Bonaventure is bringing in six new players this year including 3 freshmen, 1 junior, 1 senior and a graduate transfer. The three non-freshman recruits include Chinonso Obokoh, David Andoh and Matt Mobley. Obokoh transferred from Syracuse after playing three seasons in the Carrier Dome. Andoh came to the Bonnies from Liberty, while Mobley joined the team after playing at Central Connecticut. Mobley averaged 17 points per game at CCS and Andoh posted 10 points and 7 rebounds per game while at Liberty. Coach White summarized Mobley and Jaylen Adams’ impacts on offense.

The Gators and the Bonnies have only played once before, with Florida taking down St. Bonaventure, 88-75 on December 27, 1977 at the Gator Bowl in Jacksonville. While the teams have only faced off once, Mike White and Mark Schmidt have crossed paths before while White was still at Louisiana Tech. The Bulldogs took down the Bonnies in that game, 76-72, in the final round of the 2013 Gulf Coast Showcase.

In the second week of the AP Poll, the Florida Gators did not receive a ranking, but garnered 38 total votes, a step up from pre-season AP Poll where they received only 18 votes. Only four teams received more votes to be in the AP Top 25 (Dayton, Maryland, FSU and San Diego State).

The Gators have vastly stepped up their free-throw shooting game, going 78.6% from the line in two games this season, up from their abysmal 64.7% average last season. Their last game vs. Mercer, in which the Gators shot 80% from the foul line, marked only the fifth time in the last two seasons where Florida shot a combined 80% or better from the charity stripe. Coach White mentioned in detail how much of an impact bringing in a sports psychologist in the offseason did for them.

Florida is t-19th in offensive rebounds per game, averaging 17.5 per game. The Gator dominance on the offensive boards against Mercer led them to victory, as UF grabbed 20 offensive rebounds, leading to 24 second-chance points. To put it in perspective, the Bears only had 22 total rebounds in the game. Florida had 47.

Florida ranks t-13th in turnover margin in the country, with an 8:1 ratio. The Gators are outscoring their opponents, 46-13, off of turnovers, and had a 22-6 advantage against Mercer last game.

St. Bonaventure-Florida tips off at 7 PM in Lakeland at The Lakeland Center. The game can be streamed on the SEC Network+ with Bernie Guenther and Bill Koss on the call. You can listen to the game on the Gator IMG Sports Network with Mick Hubert and Mark Wise leading the broadcast.

1200 bags filled, 600 families served. This is what #GatorGood looks like. #GoGators #Thanksgiving pic.twitter.com/LofguEg1DN