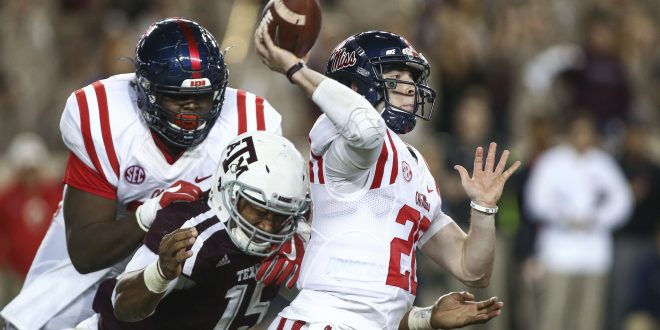 After stunning Texas A&M, the Rebels look to ride a wave of confidence against Vanderbilt tonight in pursuit of a win that’d make them bowl eligible.

No Shade On Shea

When Ole Miss QB Chad Kelly went down with an injury, the team turned to freshman QB Shea Patterson. Up against a then-ranked No.8 Texas A&M team, the chances of victory were slim. But the Rebels tore through the Aggie defense en route to a 23-point fourth quarter to secure the 29-28 win. Patterson threw for 338 yards and two touchdowns in his collegiate debut, leading Ole Miss head coach Hugh Freeze to call it a special quarter. Freeze always knew Patterson had the “It” factor. The 6-foot-2 signal caller is a five-star recruit and was ranked as the best QB in his class. His standout performance earned him SEC Freshman of the Week.

A coach and his quarterback. @CoachHughFreeze and @SheaPatterson_1 embrace after a thrilling win over the Aggies! @OleMissFB pic.twitter.com/FP6Lwjh58d

Freeze isn’t the only one showering the freshman with praise. Vandy coach Derek Mason likened him to Johnny Manziel with his abilities to extend plays and wreak havoc on opposing defenses.

The Commodores’ 4-6 record belies their sneaky good defense. Patterson will be put to the test against a team that surrenders 22 points per game, good for 29th in FBS. However, they’re not invulnerable to giving up yardage. They surrender 405 yards per game, 61st in the country. Starring for the defense is linebacker Zach Cunningham. He leads the SEC in tackles (104) and is second in solo tackles (56). He’ll put a major strain on an Ole Miss running game that is already lacking. The Rebels’ top rusher is Akeem Judd with 656 yards, 14th best in the conference.

With the run game being downplayed more than usual, Freeze will have to get innovative once again and focus on an aerial assault. Against the Aggies, Patterson spread the love, throwing at least two completions to six different teammates. A.J. Brown and Damore’ea Stringfellow were the two primary targets with a combined 151 yards on nine catches and one touchdown.

Besides getting experience for players, Vandy’s season has no aspirations anymore. Ole Miss, however, is one win away from playing in a bowl game for the fifth straight season. Freeze says a bowl game is crucial to continue giving his young players experience as well as giving his seniors something else to fight for.

Kickoff is at 8 p.m. on the SEC Network.