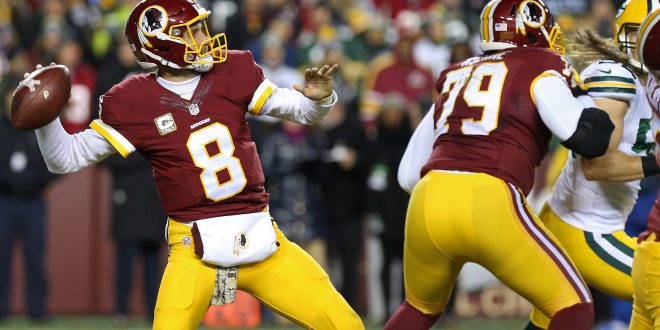 Despite Cousins’ inconsistencies throughout his career,  he is always proving himself with games like these.

The Redskins exposed how fragile the Packer secondary is by attacking them deep. Head Coach Jay Gruden went for the jugular, cutting Cousins and the wide receivers loose down field even with the lead late in the game.

Cousins found his favorite target, DeSean Jackson, for a 17-yard touchdown to put the Redskins on the board first.

The Packers would answer back with Aaron Rodgers and Jordy Nelson connecting for a 13-yard touchdown to tie the game at 7-7. But the Redskins would take the lead going into half-time and unleashed aggressive play calling in the second half.

Jamison Crowder shook a linebacker out of the slot to get loose down the middle of the field. Cousins threw in a tight window to hook up with Crowder for a 44-yard touchdown.

The scoring continued for the Redskins as DeSean Jackson got loose once again, this time for a 70-yard home run. The touchdown capped off a high flying offensive display and put the game out of reach.

Aaron Rodgers was surprisingly the best rusher for the Packers, leading the team with 33 yards. Running back James Starks finished the day with only 25 yards on the ground. The slow start by the Packers offense was costly and Rodgers credited that to their current disappointing season.

The Redskins improves to (6-3-1) and look towards a big showdown with the impressive Cowboys while the Packers drop to (4-6), their fourth straight loss of the season.

Originally from Ocala, Florida. University of Florida Class of 2017. Avid FIFA player willing to beat anybody. Follow me on Twitter for everything you need to know!
@JoshLaSelva
Previous Jaguars Drop Fifth Consecutive Game
Next Buccaneers Beat the Chiefs; Stay in Playoff Hunt