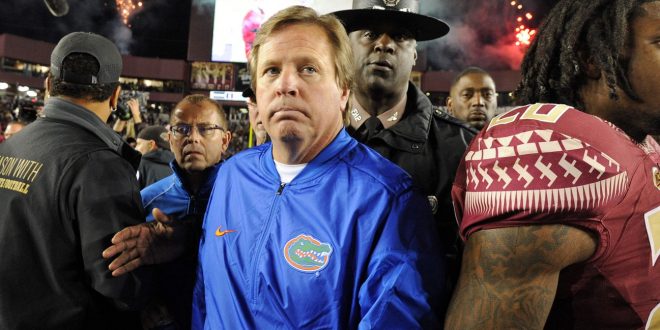 In a disappointing performance from Doak Campbell Stadium, Florida (8-3) dropped a 31-13 nonconference game to in-state rival Florida State  (9-3) on Saturday night in Tallahassee. FSU extends its streak over Florida to four straight wins following the dominant outing. The Gators had a dismal offensive perfomance, going 0-for-12 on third down conversions while allowing six sacks of quarterback Austin Appleby.

Florida started fast, relying on its offensive playmakers to string together a 73-yard drive that ended in a scoreless fourth and goal conversion attempt. The aggressive call by Florida head coach Jim McElwain will undoubtedly be scrutinized, but that opening drive was the best offensive production that Florida saw all game. Perhaps McElwain knew what was in store. The Seminoles responded with a 65-yard drive of their own, but Ricky Aguayo’s 49-yard field goal attempt fell short to leave the score at 0-0.

Florida’s second drive of the night ended quickly.  Appleby held the ball for too long and allowed a strip sack by Josh Sweat that resulted in Florida’s first turnover. Florida State had a very short field after the turnover, and tailback Dalvin Cook capped off the 24-yard scoring drive with a 17-yard touchdown run.

Florida’s ensuing drive ended with one yard of offense and its first punt of the day, and FSU’s next drive began on Florida’s 49-yard line. Gifted with fantastic field position, FSU drove 44 yards before settling for Aguayo’s first field goal conversion – a 22-yarder that made the score 10-0 lead.

The Gators settled in after falling behind early, and Florida consumed 7:28 of game clock in a 16-play, 54-yard drive that ended in Eddy Pineiro’s 38-yard field goal conversion. Down 10-3, Florida’s defense stood strong and gave the Gator offense another shot to close the gap before halftime.

The Gator offense responded by going three-and-out before punting it away for the second time of the night. The Gator defense bent, but refused to break — blocking Aguayo’s third attempt from 44 yards out. Florida relied on some solid defensive play to keep it close in the first half.

Florida and Florida State traded punts to start the second half. Gator defensive back Chauncey Gardner came up with an interception against quarterback Deondre Francois to help swing the momentum, but Florida was only able to manage a 38-yard Pineiro field goal. With the score at a manageable 10-6, FSU quickly drove 75 yards and took a commanding lead.

The Gator defense watched Duke Dawson leave the field with a minor injury in the third quarter, but coordinators decided to keep a linebacker in on the following third and 10 play. Francois easily found wideout Travis Rudolph for a 46-yard touchdown pass to go up 17-6.

Florida was again unable to generate any threat of an offense, surrendering a fourth Johnny Townsend punt to set up FSU’s next score. The Seminoles extended their lead to 24-6, driving 77 yards downfield as fullback Freddie Stevenson capped off the scoring possession with a 27-yard touchdown scamper.

Florida caught a break in the fourth quarter when Nyqwan Murray fumbled a punt return. The game’s leading tackler, Marcell Harris, made a heads-up special teams play and made the score 24-13 by returning the fumble 12 yards for Florida’s sole touchdown. Florida State also went three-and-out on their next drive, but the Gators were unable to convert the momentum into any meaningful change.

In what proved to be the prevailing theme of the night, the Gator offense struggled to control the line of scrimmage — allowing Appleby to be sacked for an 11-yard loss on third down. Florida punted once again, and FSU’s offense rumbled downfield before Francois coughed up a fumble forced by Marcell Harris. Gator cornerback Jalen “Teez” Tabor dove on the loose ball to secure Florida State’s third turnover of the game. Despite the impressive defensive performance against an explosive offense, Florida’s efforts fell short. The Gator offense went on to allow two sacks in three plays, prompting Appleby’s second fumble on third and 17. Seminole defensive tackle Derrick Nnadi earned the strip sack, overwhelming Florida’s wounded offensive line for a game-defining  turnover.

Beginning their drive at the UF 26-yard line, the ‘Noles made the score 31-13 as Francois trotted in for an eight yard touchdown run. Francois finished 15 for 26 passing for 138 yards, a touchdown and an interception to compliment his 63 rushing yards. Meanwhile, Dalvin Cook absolutely dismantled Florida’s defense, rushing for 5.9 yards per carry in a 153-yard effort.

When asked about the loss, McElwain said “it hurts”, while crediting FSU with a great performance. Coach McElwain also says that the Gators failed to execute their blocking assignments, and the upcoming game against Alabama will be tough.

The final score was less indicative of Florida’s defense faltering, and more of a testament to how offensive production can help defenders rest and react to their opponent’s game plan. Riddled with injuries and lacking any signs of offense, Florida simply couldn’t keep up with the Seminoles. The Gators had opportunities at times, but ultimately gift-wrapped the win for FSU by giving it excellent field position throughout the game.

The Gators will regroup and get back to work as they ready for next Saturday’s SEC Championship showdown in Atlanta with the top-ranked Alabama Crimson Tide (12-0).