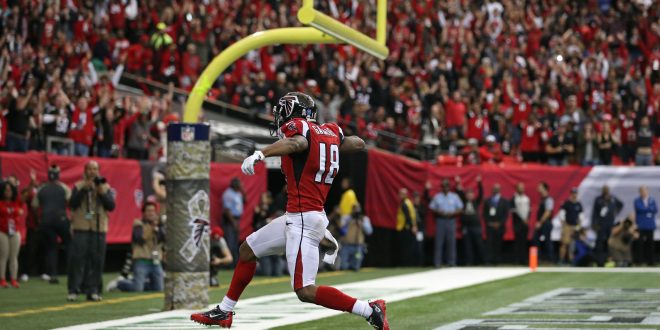 Nov 27, 2016; Atlanta, GA, USA; Atlanta Falcons wide receiver Taylor Gabriel (18) runs after a catch for a touchdown in the second quarter of their game against the Arizona Cardinals at the Georgia Dome. Mandatory Credit: Jason Getz-USA TODAY Sports

The Cardinals(4-6-1) seemed optimistic with their first opening possession all season and a touchdown by Jermaine Gresham in the first 10 minutes. But soon after, the Falcons (7-4) offense responded with touchdowns by Devonta Freedman and Taylor Gabriel. The Falcons went into the half leading 17-13 and resumed the second half with back-to-back touchdowns by Tevin Coleman and Taylor Gabriel. David Johnson scored another TD for Arizona in the fourth quarter before Devonta Freeman rushed for an additional TD to end the game with a score of 38-19. Atlanta QB Matt Ryan passed for 269 yards and two touchdowns with only one interception, while WR Taylor Gabriel is proving his value through his speed.

This is a season scoring-high for the Falcons as well as their eighth consecutive win over the Cardinals.

Going into Sunday’s game the Saints were 4-6 coming out of a two-game losing streak that trailed a four-game win streak. But with a final score of 49-21, the Rams (4-7) matchup was a stand-out game for Saints QB Drew Brees. He threw 310 yards for four touchdowns. He even managed a backward pass to Willie Snead IV who then threw it to Tim Hightower for a 50-yd TD pass. Although the Rams couldn’t keep up, QB Jared Goff put up a solid performance and threw for three touchdowns with only one interception.

The Saints' rack up 49 points, the most a team has scored in a game this season, behind a 5 TD performance from Drew Brees. pic.twitter.com/qc9BijIgBe

The Giants (7-3) rode a five-game victory streak (their longest since 2007) on Sunday at the FirstEnergy Stadium to keep the Browns winless. It wasn’t the most brutal loss of the season, but the  322 yards passed by Josh McCown only yielded one touchdown by Corey Coleman. Aside from that, they relied on kicker Cody Parkey who got them two field goals. But that just wasn’t enough to beat the Giants. QB Eli Manning threw more precisely with 194 yards for three TDs by Dwayne Harris and Odell Beckham Jr. The game finished with a final score in favor of the Giants of 27-13. No opponent has put up less than 24 points against the Browns this season. Hue Jackson, who is in his first season as the Browns’ head coach, briefly tore up at the post game conference when discussing his teams record.