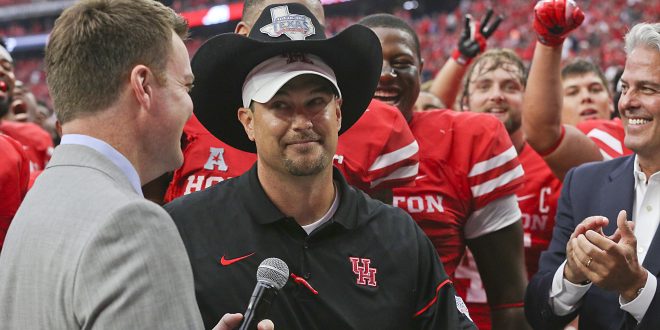 Herman is Home at University of Texas

“I want to give a heartfelt thanks to the University of Houston…the Houston campus and the greater community and most of all the exceptional young men. Houston will always have a special place for me and my family,” Herman said, “But now we’re home.”

Thanks @CoachTomHerman for your leadership, spirit & contributions to our championship caliber program. You'll always be a #ForeverCoog. 1/3 pic.twitter.com/rUzrdVGGVd

Herman did and said all the right things throughout the presser, from raising his hand to do the “Hook’em Horns” sign to promising championships.

Throughout the 41-year-old’s coaching career, including Texas, Herman has been on staff for seven colleges in the state of Texas. His first coaching job was in 1998 as the wide receiver coach at a small, private college called Texas Lutheran, located about 50 miles from Austin.

After a year at Texas Lutheran, Herman took a graduate assistant job at Texas.

His first coaching job outside of Texas was at Iowa State, which was also his first as offensive coordinator, where his team finished the season with a 7-6 record after going 2-10 the season prior.

The coaching job that made Tom Herman nationally known was at Ohio State. Herman played a significant role in their 2014 national title (first since 2002) as offensive coordinator. His talent was shown not just by winning the title, but winning it with two backup quarterbacks. As a result, Herman received the Broyles Award, given annually to the nation’s top assistant coach.

Upon receiving his first head coaching position at Houston in 2015, the program quickly became a model of what was seen at Ohio State. In his first season, Herman led the No. 21 Cougars to their first American Athletic Conference title by taking down the Temple Owls 24-13. The team finished their season with a 38-24 Peach Bowl victory over the No. 9 Florida State Seminoles. It was their first win against an AP top-10 team since 1979. Concluding the season ranked No. 8 in both the AP and Coaches Polls and only one loss, it was their highest top-10 post-season ranking since 1979.

This season, however, has not been the same narrative. Following the 36-10 throttling of the then No. 5 Louisville, Houston dropped their final regular season game to the unranked Memphis Tigers. The Cougars’ record fell to 9-3. Their other two losses came to Navy and Southern Methodist University.

After going 22-4 at Houston, Herman will look to turn around a program that has not had a winning record in three consecutive seasons.