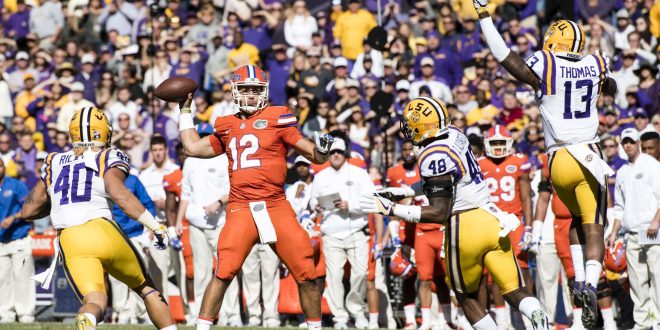 It’s fitting for the No.15 Florida Gators (8-3) to play the No. 1 Alabama Crimson Tide (12-0) for the 25th edition of the SEC championship game.  After all, it was this matchup twenty five years ago that changed the college football landscape forever by becoming the first conference championship game ever played.   It was a cold day in Birmingham, Alabama back in 1992 where the Gators led by Shane Matthews fell just short, throwing a pick six in the dwindling minutes that proved to be the difference.  Times have changed, though, as the Gators are led by Austin Appleby and the location changes from Birmingham to Atlanta.  But one thing hasn’t changed: the stakes are high as always.

Appleby, a Purdue transfer, became the starting quarterback for the Gators after Luke Del Rio’s injury against Arkansas.  Since then Appleby has passed for just under five-hundred yards for three touchdowns and even led the Gators to defeat LSU.  His biggest challenge comes this weekend against Alabama, referring to the game as a minor league NFL game.

The Crimson Tide defense has suffocated opposing offenses all season long.  So far this season, they have only allowed eighteen trips to the Red Zone and approximately eleven points per game. Three of their four starters in the secondary have scored a touchdown off an interception. Their defensive front seven has allowed just under sixty-nine rushing yards a game even after facing nine different 1,000 yard rushers this season. Spearheaded by defensive tackle Jonathan Allen, who consistently finds a way in opponents backfield. Allen will have his own private gameplan drawn up along with every player on the Crimson Tide defense according to Appleby.  With stats like these even Appleby tips his hat to their accomplishments.

However, there is a confidence that exudes from Appleby about playing Alabama.  With faith in the game plan, Appleby believes that the offense is capable of having success against this defense. Appleby emphasizes the game will be decided by their success in the battle of the trenches.

The stats favor Alabama by a huge margin as they come into the game as 24-point favorites. However, the game isn’t played on paper but rather on the Astroturf of the Georgia Dome which sees it’s last SEC Championship Game before being demolished on June 1, 2017.  The game will be played at 4 p.m. as both teams fight for the title of SEC Champion.