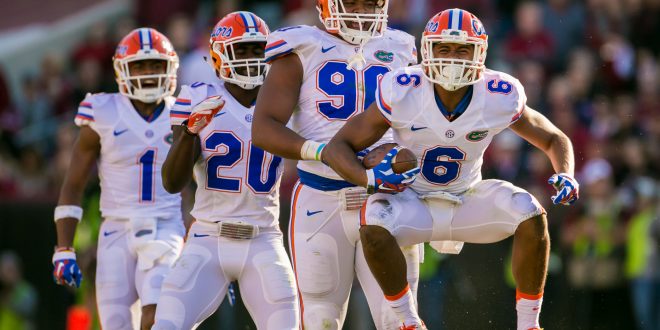 The Florida Gators are returning to Atlanta this weekend for the SEC Championship Game. This marks the second year in a row the team has won the SEC East. The Gators are hard at work as they prepare to face No. 1 ranked Alabama. Florida Gator defensive back Quincy Wilson says the Gators are ready to showcase their talent and handle business against the Crimson Tide.

Junior Quincy Wilson has seen a lot of play in his time as a Gator. The South Florida native played in each game his freshman year and appeared in 14 games last season. Wilson was certainly well-prepared for 2016, and has been a huge asset to the Florida Gators defense. He has improved greatly through each season. Wilson says he came to Florida to play with the best defensive backs in the nation and has learned a lot from his older teammates. He also says he enjoys going up against Jalen (Teez) Tabor in practice, and feels they thrive off of their competitive natures.

The Florida Gator defense is hard at work preparing for Alabama’s offense. Alabama quarterback Jalen Hurts, a true freshman, provides tons of mobility for the Crimson Tide. Receivers Calvin Ridley and ArDarius Stewart are also key players the Gator defense needs to be prepared for, as they can get down the field quickly. Wilson says these two receivers rank near the top of the list compared to other receivers the team has faced this season. He also says he feels Alabama’s running game has improved from last year. The Gators will need to establish themselves early on in order to stop the Tide.

It is very clear that Alabama is largely favored to win this game. However, college football seems to always provide excitement, and upsets do happen. Wilson says despite being the underdog, the team is ready to play how they always do and showcase their talent.

The SEC Championship game is set for this Saturday. The game will be played in Atlanta at the Georgia Dome. Kickoff is at 4:00.

Born and raised at the ballpark! Typically quiet- until it comes to sports. I'm a South Florida native with a passion for baseball nearly as strong as my faith. Grew up in garnet + gold, turned out sporting orange + blue. Likely to be found with a camera. And yes, I take food pictures.
@victoriarossman
Previous SEC Championship Marks the End of Verne’s SEC Journey
Next Scott Stricklin on His First Month as Florida’s Athletic Director