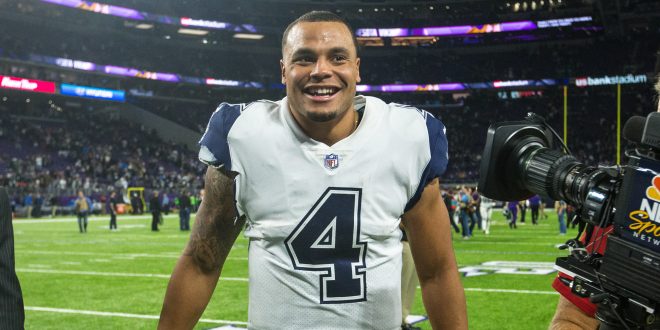 Last night, the Dallas Cowboys traveled to Minnesota for a Thursday Night matchup with the Vikings. The last time the team lost was Week 1 against the Giants. The Cowboys have had a high-octane offense all season, as they have been led by rookie quarterback Dak Prescott and rookie running back Ezekiel Elliot. However, last night was a quiet night for the Cowboys’ dynamic duo. Despite this, Dallas was able to pull off the close victory over Minnesota.

The Vikings did an impressive job of holding a star powered offense to 17 points. The Minnesota secondary, led by cornerback Xavier Rhodes, held Prescott to 139 yards and just a single touchdown. Additionally, Elliot, the league’s current leading rusher, was held to 86 yards and hit pay dirt just once.

The team’s first score didn’t come until late in the second quarter when Prescott found wide receiver Dez Bryant for a deep bomb. The Cowboys finished off the drive by feeding Elliot who took it into the endzone for the short score. However, after this play Minnesota’s defense suppressed Dallas and stopped them from scoring again until the fourth quarter.

But the Cowboys showed that even though their offense was lacking, they could still find a way to win the game. Head coach Jason Garrett said his team stepped up in other areas when they needed. The defense held opposing quarterback Sam Bradford and company to just one touchdown all game. The Cowboys also limited Minnesota’s rushing attack to a measly 87 yards. The Vikings were held to field goals all game, until they were finally able to break into the endzone late in the fourth quarter.

In the last quarter of the game, Minnesota receiver Adam Thielen fielded a punt deep within Vikings territory. Cowboys line backer Kyle Wilber stripped the ball, and gave possession back to his team with red zone field positioning. On the next play Prescott found Bryant for a quick pass to left, and Bryant beat Rhodes to the pylon. This sequence of events solidified the momentum in Dallas’ favor.

Minnesota couldn’t take advantage of their great defensive play last night. Bradford did play well, as he did his best to piece drives together for the Vikings. He put up a solid stat line, completing 32 of 45 passes for 247 yards and a touchdown to boot. While the Vikings defense was all over the field making plays, the offense struggled against the Dallas defensive front. The lack of running back Adrian Peterson is clearly hurting the team. Jerick McKinnon was the team’s leading rusher, but only had nine carries for 41 yards.

The team’s only touchdown came late in the fourth quarter. Bradford dinked and dunked his way down the field, and eventually found McKinnon for a touchdown with 25 seconds left to play. As the Vikings went for the two-point conversion, Bradford thew the ball way past the endzone. Replays showed a Dallas defender hitting Bradford in the facemask after the pass was thrown, a punishable offense, but no call was made, sealing the Cowboy victory. When asked about the play later, Bradford asked how the official didn’t think he was penalized.

Moving forward, both teams will have the rest of the week off. Dallas will visit New York for a Sunday night showdown against their rival Giants next week. For the Vikings, they’ll travel to Jacksonville next Sunday for a game against the Jaguars.