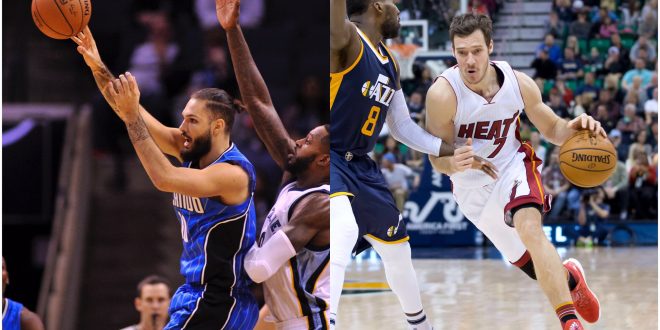 One proved to be a big number yesterday for NBA teams in the sunshine state. One point was the difference between a win and a loss for both the Miami Heat and the Orlando Magic. The Heat barely pulled off a 111-110 win over the Utah Jazz, while the Orlando Magic narrowly fell to the Memphis Grizzlies 95-94. Miami now has two wins in a row under their belt, which is their longest winning streak of the season. The Heat continue to play better on the road with five of their seven wins being outside of the American Airlines Arena. Meanwhile, Orlando fans with high hopes after their win against the San Antonio Spurs were left disappointed once again.

Your @MiamiHEAT hang on late for a 111-110 road victory over the Utah Jazz! pic.twitter.com/yLDIdPE2Gl

The Heat Hang On

The Miami Heat hung in the game until the very end to pull off a win on the road, breaking the Utah Jazz four game winning streak. The Heat may have one of the worst offenses in the league this season being ranked 27 in points per game, but offense was not an issue last night.

It was neck and neck from the beginning with Miami trailing Utah by only one point at the end of the first quarter. In the second quarter, the Heat fired up and outscored the Jazz by five points going into the third. Much like the second quarter, the third belonged to the Heat.  The Jazz tried to muster up enough energy to make a fourth quarter comeback, but the last minute effort by Utah wasn’t enough to avoid the loss by the slimmest of margins. The Jazz had the ball with just under four seconds remaining and Gordon Hayward missed the midrange jumper before time expired. Hayward’s missed shot was enough to seal the fate for the Heat giving them the 111-110 win. Heat head coach Erik Spoelstra says a win on the road is tough and although it was only by one point, a win is a win.

Top performers for the Heat included Goran Dragic with 27 points and six assists, Hassan Whiteside with nine points and ten rebounds, James Johnson scoring a season high of 24 points, and Wayne Ellington adding 17 points to the board. For the Jazz it was Gordon Hayward with 32 points and seven assists, the highest scorer of the game. Rudy Gobert also contributed to the Jazz with ten rebounds and six points.

Next, the Heat will travel to Portland to take on the Trail blazers on Saturday at 10.

Tough one. Magic now head to Philly, where they'll face the Sixers on Friday. pic.twitter.com/znBzTBqyab

Missed Opportunity for the Magic

The Magic went into the game riding  momentum after defeating the impressive San Antonio Spurs. However, they couldn’t get past the strong play of the Grizzlies in the fourth and Memphis left with a snapped losing streak.

The game contained a lot of seesaw action with both teams exchanging leads. At the end of the first the Magic were down by two, but it clearly was anyone’s game. The second quarter belonged to the Magic but they were still down one point going into halftime. The third was where Orlando started forming a little bit of a cushion over Memphis, outscoring them by four points. The Magic took a 14-point lead midway through the fourth quarter, but then completely blew it turning the ball over and committing costly fouls. The poor play by Orlando late in the game led to a disappointing 95-94 loss.

Top performers for Orlando include Evan Fournier with 28 points and four assists, and Bismack Biyombo with 14 rebounds. Fournier says this loss hurts bad and the last five minutes of the game are what made the difference. For the Grizzlies, Marc Gasol led the way scoring 25 points, including a pair of game-sealing free throws. Other contributors to the Memphis win include Andrew Harrison with 11 points, eight assists, and four rebounds and Jarell Martin with six points and 10 rebounds.

Next up, the Magic will travel to Philedelphia to take on the 76ers tonight at 7.

The Orlando Magic opened their training camp for the 2020-2021 season on Tuesday. Even though …