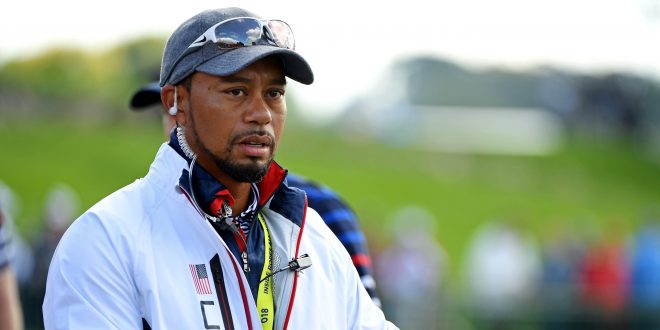 Tiger Woods made his return to the golf course for competitive action for the first time in 466 days by shooting a roller-coaster 1-over-par 73 in the first round of the Hero World Challenge.

Woods sits in 17th place out of 18 competitors, nine shots back of the leader, J.B. Holmes, but was at one point tied atop the leaderboard in a first round that saw semblances of the old Tiger.

Woods teed off his round by two-putting for par on the par-4, first hole. He picked it up from there, making four birdies in the following seven holes to put him at -4 through eight holes, and tied atop the leaderboard.

Woods noted his quick start, saying it was good to get back in to the flow of the round by the second hole.

The first round even saw the return of the classic fist-pump from Tiger, a sign of the energy he was feeling in what seemed like an excellent return.

However, after shooting a birdie on back-to-back-to-back holes on six, seven, and eight, Woods tailed off, falling into a slump that sent him towards the back half of the leaderboard.

He shot a bogey on the ninth to drop him back down to -3, and he then proceeded to shoot a 40 on the back-nine that included two double bogeys in the last three holes. Both were on par-4s, with the second one coming on the last hole, dropping him to +1 for the round.

Woods didn’t give any indication of discomfort after the round, saying that he “felt good” through the 18 holes, instead saying that he simply failed to drive well enough to take advantage of the course.

Woods will try to make his way back up the leaderboard during the second round on Friday while being paired with Justin Rose, who sits at +2. This an event that Woods hosts each December, and one in which he has 10 top-two finishes. His last came as a runner-up in 2013 after losing in a playoff against Zach Johnson.