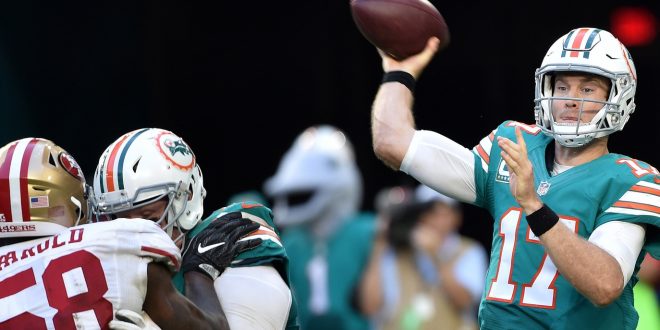 The Miami Dolphins are on a six-game winning streak after defeating the San Francisco 49ers Sunday 31 -24—the second longest active winning streak in the NFL. After losing the first two games this season, the Dolphins have made a major comeback. They are currently ranked second in the AFC East behind the New England Patriots, and the NFL Playoffs are now a possibility.

Miami has outscored their appointments by 41 points during the winning streak. For the Miami Dolphins players, the playoff positioning at this point is not what the team is worried about. The next game is an away game against the Baltimore Ravens. The Dolphins are 2-3 on the road this season. The question is, will the Dolphins continue the winning streak to make it seven games in a row?

This week, the Dolphins are preparing to take on Baltimore Ravens (6-5) at the M&T Bank Stadium in Baltimore. This is an important game for the Ravens as they are determined to capture the AFC North division for the first time since 2012. 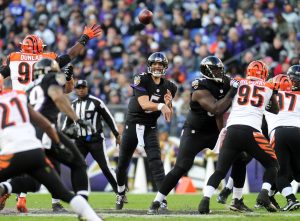 On Sunday, the Ravens beat the AFC division rival Cincinnati Bengals 19-14. Beating the Dolphins will keep the Ravens on top of AFC North over the Pittsburgh Steelers. This game will be the fourth straight year the Dolphins and Ravens have met. The Ravens have won five of the past six meetings, and lead the all-time series 7-6. This is the teams’ first meeting at M&T Bank Stadium since 2010.

Head Coach Adam Gase said its hard to focus on the winning streak when the team needs to focus on the opponent. ” I think it’s hard for us to worry about anything else. Our focus is so small, we’re worried about what we’re going to do this week. Guys are still looking at yesterday as far as, what do we have to fix? What do we need to do better? It’s hard to look down the road because you have so much focus on what’s going on that week.” 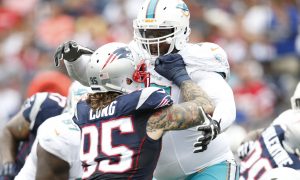 The players are thinking the same way. Left tackle Branden Albert says the team can’t focus on the winning streak. They need to focus on the next competition.

Stand out players to look out for 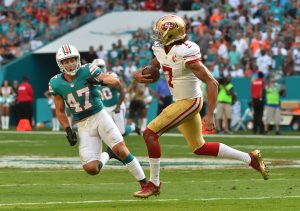 On offense, running back Jay Ajayi rushed for 529 yards in the first three games of the winning streak. However, he has slowed down since. He is still averaging 4.1 yards per carry despite being held to 45 yards on 18 attempts by the 49ers. Overall, Ajayi ranks seventh in the NFL with 847 rushing yards, fourth in rushing yards per game, and eighth in the league with seven touchdowns. On defense, linebacker Kiko Alonso leads the Dolphins with 91 tackles, two interceptions, one forced fumble, and four fumble recoveries. Alonso assisted with the game winning tackle against San Fransisco 49er Colin Kaepernick on the two yard line, which resulted in the Dolphin victory.

The Miami Dolphins will take on the Baltimore Ravens this Sunday at 1 p.m.

Hello my name is Kaitlin Alexander, a passionate story teller and lover of sports. Fun facts about me: I am a world traveler, interviewed all three UF Heisman Trophy winners, and a former intern of Bleacher Report. Follow me on Twitter: KalexanderUF
@KalexanderUF
Previous College Football Championship Weekend Has Arrived
Next Florida Volleyball: Sweep and a Showdown