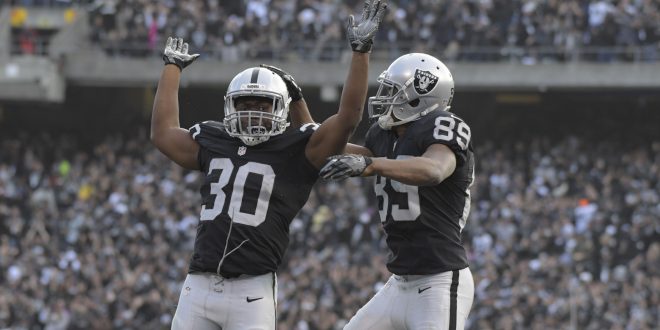 Around the NFL – Sunday Recap Week 13

The month of December can either make or break teams that are in the hunt for the playoffs. With only four weeks remaining in the season, every game matters.

Matt Prater knocked in five field goals for the Detroit Lions with the longest coming from 52-yards away. This tied Prater’s career high and proved to be the difference in their 28-15 win against the Saints.

Saints quarterback Drew Brees had a rough day in the office, throwing three interceptions and no touchdowns. Meanwhile, his counterpart Matthew Stafford threw for over 341 yards and two touchdowns.

The sealing play of the game was a 66-yard strike to Golden Tate who was left uncovered in the secondary.

THE @LIONS CANNOT BE STOPPED!

No matter the circumstances, the Oakland Raiders continue to find a way to win the game.

Down by 15 points in the 3rd quarter to the Bills, Derek Carr and the rest of the Raiders managed to turn the game around in front of their home crowd.

The Raiders went on to score 29 unanswered points to win 38-24 and improve their record to 10-2. Carr finished the day with 260 yards through the air and two touchdowns, including this throw to Amari Cooper that gave them the lead in this game.

Falcons’ Mistake Costs Them Against the Chiefs

A qwerky football game ended with the last score being just as odd.

The Chiefs scored in a variety of different ways – once from a fake punt and another from a pick six, but managed to surrender the lead in the 4th quarter.

Quarterback Matt Ryan led the Falcons down the field to score a touchdown on a 5-yard pass to Aldrick Robinson which put them up 29-28.

Head coach Dan Quinn elected to go for a two point conversion to make the Chiefs have to score a touchdown to win and a field goal to tie. Matt Ryan attempted to find his receiver, but instead found Eric Berry for his second interception of the game. Berry took the interception all the way, scoring two points for the Chiefs.

The Dolphins 6-game win streak came to an end thanks to a shutdown performance by the Baltimore Ravens, who are also in the hunt for the playoffs. The Dolphins dropped to 7-5 and will need the Broncos (8-4) to start losing some football games if they want to reach the postseason.

With the Ravens winning, the pressure is on for the Pittsburgh Steelers if they want to go to the playoffs. The Ravens are in position to win the AFC North and control their own destiny. The Steelers either need the Ravens to lose or the Broncos and Dolphins to start faltering.

In the NFC, the tightest race is in the NFC South between the Atlanta Falcons and the Tampa Bay Buccaneers. Both teams are tied in the standings at 7-5, and play tough opponents down the stretch including a Sunday night matchup between the Bucs and the Cowboys.

Originally from Ocala, Florida. University of Florida Class of 2017. Avid FIFA player willing to beat anybody. Follow me on Twitter for everything you need to know!
@JoshLaSelva
Previous Ravens End Dolphins Six Game Win Streak
Next Florida Gators are Tampa Bound, Will Play in the Outback Bowl