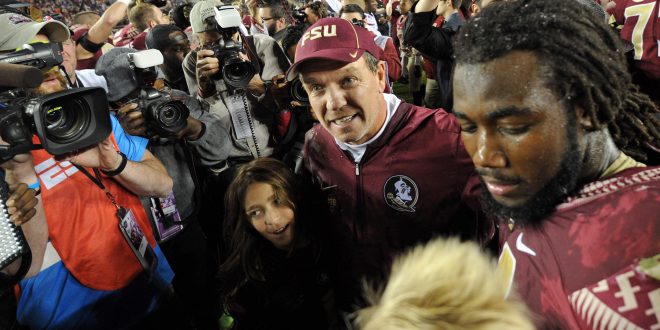 Although the Florida State Seminoles (9-3) season has not gone entirely as they would have hoped, they finished the season with nine wins and a No. 11 CFP ranking. Their resume is strong enough to earn them a “New Years Six” Capital One Orange Bowl bid December 30th.

The Seminoles will face the No.6 Michigan Wolverines (10-2), coached by the animated Jim Harbaugh. Michigan was hoping for a final four playoff bid. However, a 30-27 loss to Ohio State on their final game of the season ultimately kept them just out of the top four.

Did FSU Deserve The Bid?

FSU receiving the Orange Bowl bid comes much to the disappointment of the Louisville Cardinals, who can make an argument that they should be the ones represented in this game given their convincing 63-20 win over FSU in Week 3. FSU coach Jimbo Fisher speaks of being the selection over Lousiville in this game and his teams accomplishments this season.

While playing in this game is not the ultimate goal of either team, both teams acknowledge the honor of being a part of The “New Years Six” and as FSU head coach Jimbo Fisher put it, “We feel very fortunate, excited about it, “We’re excited about the opponent. Michigan has had a great year, we’ve had a great year, we’re looking forward to carrying the torch for the ACC and hopefully playing well.”

Michigan star TE Jake Butt, also acknowledged disappointment to not be in the playoff, definite excitement about The Orange Bowl, “(We) Really, we can’t blame no one but ourselves. We left our fate in the hands of other teams and we understand that. With that being said, we’re excited about this game.”

After a last second field goal by North Carolina handed the Seminoles their second loss in week 5, FSU found themselves with a 3-2 record and asking a lot of questions.  FSU did respond. They won six of their final seven games, including a blowout 31-13 victory over rival Florida.

The Florida State offense has shined behind the impressive play of redshirt freshmen QB Deondre Francois, and star running back Dalvin Cook. Cook rushed for 18 touchdowns and 1,620 yards this season, leading to some Heisman conversation.

However, the Florida State offense will have their hands full, as they will face the top ranked defense in the country in Michigan(S&P rating).  The Wolverines defense is second in points per game allowed at just (12.5) and total yards allowed with (253).

This will be just the third time the two schools have met. They split the first two meetings.

Fisher speaks to the uniqueness of the unfamiliar match-up, as the first meeting came in 1986. Current Michigan coach Jim Harbaugh was actually the quarterback in that game for Michigan.
Follow @tdibenz