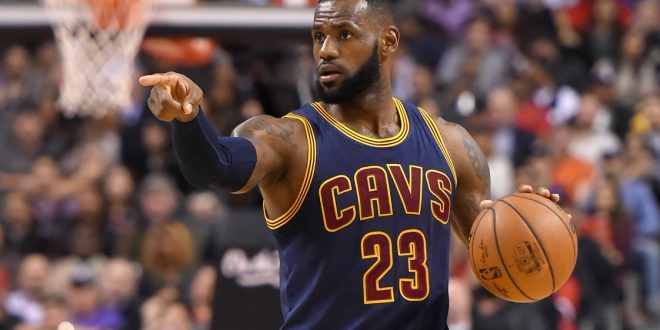 Dec 5, 2016; Toronto, Ontario, CAN; Cleveland Cavaliers forward LeBron James (23) points to where he wants his team mates to move against Toronto Raptors in the first half at Air Canada Centre. Mandatory Credit: Dan Hamilton-USA TODAY Sports

The Cleveland Cavaliers (14-5) are currently leading the Eastern Conference, coming off last year’s miracle season ending a 52-year title drought.  LeBron James looks to become the fourth player ever to lead two different teams to two consecutive titles.  James has a star-studded team that includes Kyrie Irving and Kevin Love, who will accompany him on his quest. However,  the NBA Finals is far away and right now, the main focus is on making the playoffs.

James, the unquestioned leader for the Cavs, has averaged 23.9 points and 9.2 assists per game so far this season. Those numbers put him at thirteenth and fourth in the league in these respective categories. With the types of performances James has provided all season, it makes the Cavs a difficult team to beat.  Moreover, James has a spectacular supporting cast. Kyrie Irving, the leading scorer for the Cavs, averages 24.4 points a game.

Perhaps what’s most impressive about these Cavs is their game behind the arc. They are the second best in the NBA shooting the three ball at a 39.1%. This is made more impressive given the fact that they shoot from beyond the arc approximately 34 times a game.

When they were on a temporary skid, the Cavs righted the ship with a 116-112 win over the Toronto Raptors. This came after being pounded down low by a variety of opponents, allowing 50 points in the paint to the 76ers, 68 to the Bucks, 30 to the Clippers, and 78 to the Bulls. Highlighting a weakness in the paint, the Cavs need to find a way to solve this issue as they allowed 30 to the Raptors last night.

Another struggle has been their tendency to be out-rebounded by their opponents. During the three-game skid, they were out rebounded 150-116 overall and on the offensive boards 40-19. This creates extra possessions, and it can prove deadly if they allow their opponents second chance opportunities. However, last night did show an improvement as they out-rebounded the Raptors 62-41. James believes that the way they played against the Raptors is how good they truly are.

In bad news stemming from last night, JR Smith went down with a knee injury in the first quarter against the Raptors. The extent of the injury is still unknown but should be announced shortly.

The Cleveland Cavaliers will continue their road trip next when they head to the Big Apple, to take on the New York Knicks (11-9).

After a long wait, the 2020 NBA draft has finally arrived. The first three picks …