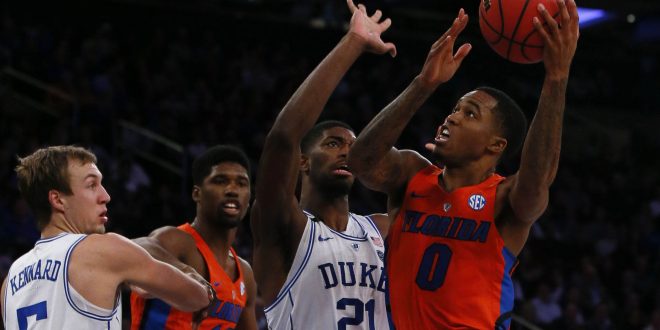 Duke went into the game as the No. 1 rated team in offensive efficiency and still managed to pull off a win with a number of key players out.

The Blue Devil trio of Luke Kennard, Amile Jefferson and Jayson Tatum was lethal in the competition. Kennard scored 29 points, making 5-of-7 from three point range, Jefferson added 24 points and Tatum threw in 22. The three of them combined to score 75 points compared to Florida’s 74.

The Gators kept up in the first half, taking an early 14-13 lead and holding Duke’s Grayson Allen scoreless on 0-for-6 shooting. Florida lost its footing shortly after and had five turnovers in the first nine minutes.

“Every time they made a play, we did a great job of coming back and taking the air out of the ball"—Jefferson:https://t.co/4ZaFhIBlJt pic.twitter.com/t4sP83mHID

The Blue Devils took control to close the second quarter. They turned a 28-26 deficit into a 41-31 advantage in the final five minutes on a 15-3 run. The Gators were never able to get over the hump after halftime.

Florida head coach Mike White says his players tried to do too much and need to work on their offense.

Mike White says his team played well but Jefferson’s skills got in the way.

With less than three minutes remaining in the game, Florida cut the Blue Devils’ lead to seven points, but they ultimately came up short.

The Gators were led by sophomore guard KeVaughn Allen who put up 21 points on 8-of-12 shooting and Kasey Hill added 13 points in the contest.

Florida loses to Duke 84-74.
Even with the loss, Gators playing well, should be ranked and NCAA bound. pic.twitter.com/imSncYdp0F

Florida dropped to 7-2 and the Blue Devils moved to 9-1 on the campaign.

The Gators will travel to Tallahassee on Sunday to face the Florida State Seminoles at 4:00 PM.