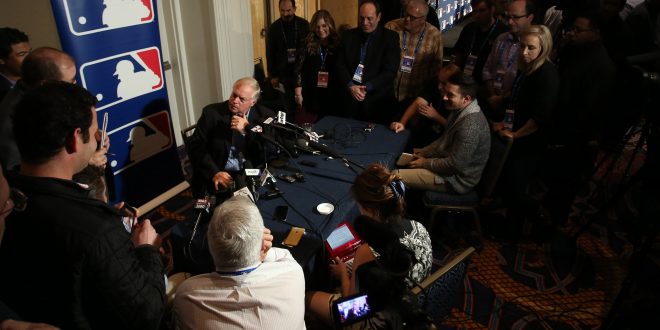 The free agent class of 2017 is one of the most barren in recent years. The best starter is a 36 year old who was playing in Independent ball less than two years ago. The best bats were all seeking multi-year deals that would obviously become dead weight in two or three years because of their age. Entering the four-day annual MLB Winter Meetings, an event where media, team front offices and players come together to wheel and deal, the consensus around the sport was that teams were going to overpay for the few elite free agents and make plenty of trades to offset the poor market.

So far, the moves and surprises have lived up to the hype. But not all teams made wise moves and some made head scratching ones.

Most “Wait, what?” Signing Award

On Wednesday, everyone awoke to some strange news — the Rockies had signed free agent outfielder Ian Desmond to a 5-year, $70 million deal. Desmond and Colorado had not been linked once in the flurry of rumors. Instead, teams looking for outfield help (Cardinals, Nationals, Rangers) were expected to land him. But Colorado felt the shortstop-turned-outfielder could now play first base for the team.

Still marveling at Ian Desmond getting five years and $70M coming off a .237/.283/.347 second half. Something says Coors Field will help.

Of course the counter to this is that Colorado is the most extreme hitter’s park in baseball. According to ESPN Park Factors, Coors Field sees 36 percent more runs scored on average in their park, much more than second-place Chase Field at 22 percent. Desmond has a realistic shot at 30 HR, a benchmark he’s never reached.

The expectation is that the Rockies, with a glut of outfielders, will trade either Carlos Gonzalez or Charlie Blackmon to another team and transition Desmond to the outfield.

The When Will They Learn Award

The 2015 championship Royals kick started a revolution. They showed the baseball world that a really good bullpen can erase a lot of shortcomings. Teams began building super ‘pens and this season, we saw the Indians and Cubs battle using Andrew Miller and Chapman in the World Series. Relievers are in vogue and they know it.

$119.2M career earnings for Aroldis Chapman, who's never made MLB start, will be FA again age 33. Teach your kids to throw 103 left-handed.

No one was surprised that Chapman landed a 5-year, $86 million deal, but despite his track record (15+ career K/9, career 2.08 ERA and routine 100+ mph fastballs), the consensus is teams shouldn’t spend this much money on relievers. Closers contribute anywhere from 50 to 70 innings a year and tend to be volatile. As a small example, of the top ten relievers in WAR in 2015, only five remained in the top 10 in 2016. And only three relievers in 2016 were in the top 10 in 2014. To Chapman’s credit, he was one of those three.

While it won’t necessarily hurt the pockets of the Yankees, other teams (namely the Marlins) who usually operate with limited payroll are now seeking to splurge on relievers. Paying relievers big money is a risky endeavor because the year-to-year outcome of each is much more volatile than that of a position player.

Runner up to this award was the Giants handing Mark Melancon, who averages about 10 mph slower on his fastball than Chapman, a 4-year, $64 million deal.

Finally admitting that they’re no match for the Indians or Tigers in the AL Central, the White Sox began a full-scale tear down of the team. They traded elite pitcher Chris Sale and his team-friendly contract to Boston for baseball’s top prospect INF Yoan Moncada, RHP Michael Kopech, OF Luis Alexander Basabe and RHP Victor Diaz. The very next day, they flipped centerfielder Adam Eaton, also on a great contract, to the Nats for top pitching prospect Lucas Giolito, RHP Reynaldo Lopez and 2016 Florida Gator draftee Dane Dunning.

First thing’s first — prospects are never a sure thing. Remember when the Marlins were landing two can’t miss prospects, Andrew Miller and Cameron Maybin, in 2007 as part of a larger deal that sent Miguel Cabrera to the Tigers? Sure, that’s cherry picking. But in the prospect world, much is said about the ceilings of players but not enough about their realistic outcome. Moncada has been called “Trout in the Infield”, with a chance at 25 HR and 40 SB annually. But that doesn’t remove his current inability to hit offspeed stuff and his struggles with strikeouts.

That said, if you’re going to rebuild, this is how you do it. The White Sox, who may also ship starter Jose Quintana and first baseman Jose Abreu for huge hauls, have gone from a bottom ten farm system to a potential top five.

The Everyone’s a Winner Award

Too often when teams make trades we race to social media to proclaim the winners. There has to be one, right? The Cubs and Royals, MLB’s last two champions, challenged that notion when they swapped a young outfielder for a former elite closer. In a vacuum, the Royals seem like the favorite. They land an outfielder making only $15 million through 2020 in exchange for a relief pitcher who had major arm concerns in 2015 and will make $10 million.

But consider how stacked the Cubs are in the outfield. Jason Heyward, Kyle Schwarber, Albert Almora, Jon Jay and Matt Szczur are all expect to split time. Soler simply had no room. The Cubs also lost Chapman to free agency. They’re banking on Davis returning to his 2014-15 form, where he threw 139.1 innings and had an ERA under 1.00. Even with arm woes in 2016, he still notched a 1.87 ERA in 43.1 IP, albeit with a fastball one tick slower than years past.

The Royals now get to award Soler what he’s been seeking since his 2014 debut — a full-time starting role. His career high plate appearances is 404 in 2015, but with guaranteed time between DH and LF, he should eclipse 600 for the first time. The chiseled 6-foot-3 Cuban is primed for a potential 25 home run campaign with an above average on-base percentage.

Kansas City… are you ready? I am! Can't wait for Spring Training. Let's do this Royals fans! #SolerPower

1B Mitch Moreland signs 1-year, $5 million deal with the Red Sox: There’s no replacing David Ortiz, but paying only $5 million to someone who’s crossed 20 home runs the last two seasons is a gamble worth taking. Moreland struggled in 2016 with Texas hitting only .233, but with a high powered offense around him and a Pesky Pole to take advantage of, he could see a return to 2015 where he slashed .278/.330/.482.

OF Carlos Gomez signs 1-year, $11.5 million deal with the Rangers: From 2012-14, Carlos Gomez transformed into a near-elite power-speed threat and accumulated 16 WAR. Then injuries derailed him. He signed with the Rangers late last season after being released by Houston and found new life, hitting .284/.362/.543 in 33 games. If Gomez can return to his old productiveness, this could be a steal. And if not, well, there’s no such thing as a bad one-year deal.