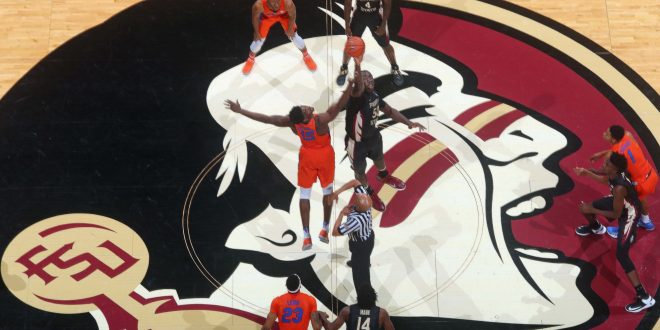 For the second straight year, Dwayne Bacon was just too much for the Florida Gators. The Florida State Seminoles took down the Gators, 83-78, winning their third straight game against UF for the first time since 1997. Bacon scored 24 points on 9-of-18 shooting, going 6-of-7 from the foul line. The last four games of the Florida-Florida State series have been decided by a total of 10 points.

Kasey Hill had a career-high 21 points for Florida on 10-15 shooting, but his effort wasn’t enough to offset Bacon’s massive game. Canyon Barry struggled mightily in this one, going 2-of-10 for six points, while KeVaughn Allen’s foul trouble limited him to 16 points in 20 minutes played. Allen went off for 32 points last season, a career-high, against the Seminoles.

Besides Bacon, Florida struggled on the boards, getting out-rebounded by the ‘Noles, 42-33 overall, and 31-24 on the defensive glass. The Gators were able to stay in the game by forcing 14 turnovers leading to 25 points. Florida’s 4-of-16 (25%) showing from beyond the arc, and 16-of-25 (64%) performance at the free throw line led to their demise. Terance Mann added a double-double for Florida State, scoring 16 points, while grabbing 10 rebounds. He went a solid 6-of-10 from the floor, as well.

Florida started the game in their usual fashion of attacking the basket with Kasey Hill and KeVaughn Allen driving strong to the rim. The Seminoles’ ability to crash the boards led to a 5-0 rebounding advantage four minutes in, leaving the game tied at eight with 15:43 left in the first half.

An early 5-of-10 start from the free throw line for Florida kept the Gators from jumping out to a bigger start, leading 14-11 after eight minutes of play.

Kasey Hill was lights out in the first half sinking 7-of-10 shots, good for 15 points. Through the first 10 minutes, Hill led the Gators with nine points on 4-of-4 shooting.

Florida State took their first lead of the game on a four-point play from Braian Angola-Rodas. The ‘Noles took a 21-20 lead on the play with 8:40 left in the first half. The Gators tied the game back up at 23-23 with around seven minutes left in the first twenty minutes after Kevarrius Hayes went 1-of-2 at the free throw line.

The Gators took their first lead since the 9:14 point of the first half with 5:42 remaining in the first frame on a Justin Leon three-pointer. Leon finished with five points in the first 20 minutes.

It was in transition where the Gators made their money in the first frame. Florida outscored Florida State in fast break points, 11-2, scoring 18 points off of FSU’s nine turnovers. The Seminoles’ lead was mainly attributed to their success on the boards, out-rebounding the Gators in the first half, 22-15, and 7-2 on the offensive glass.

Kasey Hill led all players in the first half with 15 points, but accounted for four of Florida’s seven first half turnovers. Terance Mann and Dwayne Bacon both scored eight points apiece to lead Florida State in the first 20 minutes. Mann’s seven rebounds also led both teams in the first frame.

While it improved over the course of the first 20 minutes, the Gators were a poor 10-of-16 (63%) from the free throw line, while the Seminoles sunk all but two free throws in the first frame, going 11-of-13 (85%) from the charity stripe.

Coming out in the second half, both teams matched each other with six points apiece, giving the Noles a 42-40 lead. A run where FSU sunk four of four shots gave them a 47-40 lead with 16:25 left in the game.

Florida State’s lead continued to grow, taking a 10-point lead with 14:04 left in the contest. Mike White’s frustration with the referees led to a technical foul, setting up Terance Mann with two free throws. He missed both of them keeping the lead at 10.

Xavier Rathan-Mayes gave the Seminoles their largest lead of the game up to that point, putting them up 13 points with 11:41 left in the game on an deep three-pointer. Through just over eight minutes played in the second half, Florida State was shooting an impressive 11-of-16 (68.8%) from the floor.

A 6-0, 30-second run brought Florida within three points with 2:44 remaining in the game after KeVaughn Allen completed an And-1 with a lot of contact at the rim.

Despite the close finish, including John Egbunu sinking a rare three-pointer, the Seminoles were able to close out the game, 83-78.

The Gators play next in the MetroPCS Orange Bowl Classic against Charlotte on December 17.

Alabama scored a dominating 48-17 win over rival Tennessee on Saturday, but it also suffered …