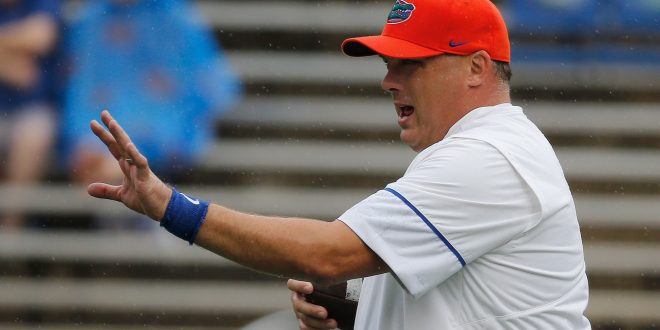 The Florida Gators are now in the hunt for a new defensive coordinator after it was announced Tuesday morning that Geoff Collins will be accepting a head coaching job at Temple University. Coach McElwain addressed the breaking news today saying he was extremely excited for his friend and colleague. The initial report was tweeted by ESPN reporter Brett McMurphy and was confirmed throughout the morning.

Even though the news of the hiring was just released this morning, McElwain and staff as well as new athletic director Scott Stricklin, are already searching for a new defensive coordinator for next season and possibly even the bowl game.

Collins has not yet stated when he will be heading to Temple and McElwain is unsure as of now if he will be able to coach in the Outback Bowl. Despite the stress of finding someone new to lead the defense, McElwain congratulated Collins, saying the Temple gig is an amazing opportunity for him and his family.

Coach McElwain hinted towards the possibility that all defensive assistant coaches could be in the running for the head job. However, one might have a slight advantage over the others.

When asked if Randy Shannon would be a good fit for the job, McElwain replied “Absolutely we’ve got a lot of options.” When at a big time SEC school like the University of Florida, coaching changes come often, something McElwain prepared for before taking the job at UF. He says preparation for new coaches is just part of the job.