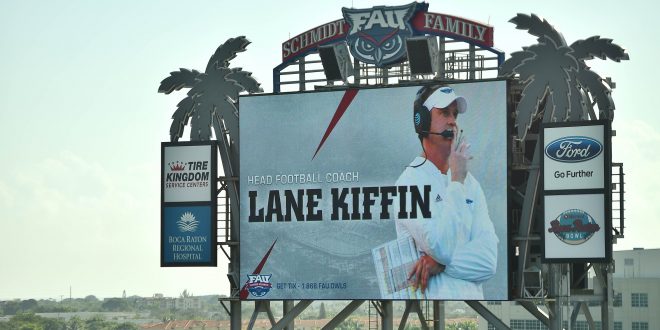 Look What the Tide Rolled In

Two Words: Lane Kiffin.  The 41-year-old current University of Alabama offensive coordinator signed a 5-year deal with the Owls on Monday.  His contract dishes out close to $1 million annually, making him the highest paid coach in FAU history.  The former Fresno State quarterback will head to Boca Raton, Florida to take over an abysmal Owls program that finished a 3-9 campaign.

The short history of FAU’s football program is nothing less than lows and even lower lows.  Well, there were some high points.  Legendary coach Howard Schnellenberger started the Owls’ program in 1999.  He was tasked with building a team from scratch, and in 2001, the team played their first Division I-AA game.  By 2005, the team moved up into the Sun Belt Conference to compete in the Division I-A level.  Schnellenberger coached the team until 2011.  In that time, the team won the 2007 conference championship and was invited to its first bowl game.  They won the New

Just three years ago, the 2013 squad lost its second program coach, Carl Pelini.  There were some sketchy activities in the Florida Keys forced him to resign.  The Owls brought in Charlie Partridge, who went 9-27 during his tenure.  The program hasn’t seen recent success, but Kiffin hopes to change that.

Kiffin is not stranger from controversy.  He has a history of bad judgment, but maybe he’s a reformed man.

Lane Kiffin says he is ready to create a winning program.  It’s barely been 48 hours and Kiffin is ruffling some feathers at FAU.  His first recruit for the Owls is DeAndre Johnson. Johnson was kicked out of FSU in the summer of 2015 for punching a woman at a bar. He played two seasons at JUCO in Mississippi.  It appears he will head south to join Kiffin’s squad and  if Johnson can stay out of trouble, he could be a huge addition to the Owls’ offense.

Lane Kiffin move to #FAU will be interesting. He needs to lay low and bring in talent. QB Johnson is a good start.

Kiffin has his work cut out for him over the next five years.  If he can continue to bring in strong recruits, his team has a chance to keep moving up.  He has a lot of talent as a coach.  He has experience leading strong programs (USC Trojans and Tennessee Vols) and spent the past two years with Nick Saban at ‘Bama.  One cause for concern is the stacked recruiting market in Florida. Florida’s Jim McElwain, FSU’s Jimbo Fisher, USF’s Charlie Strong and UM’s Mark Richt are just a few he’ll have to contend with for new recruits.

The next season will be one to watch.  The Owls can really only get better from where they are now.