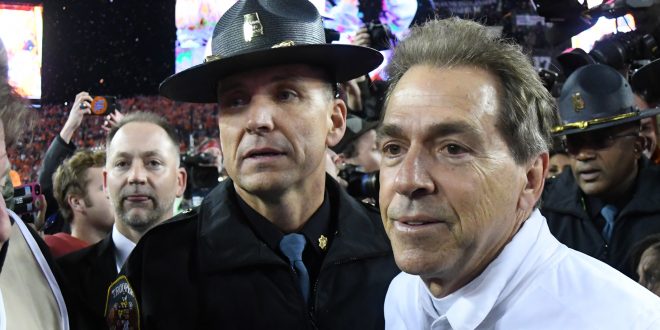 There were a number of different story lines leading up to last night’s College Football Playoff Championship Game. One would think the idea of Alabama and Clemson meeting in the Championship for a second straight year would be the most compelling, but it surely wasn’t after the game.

People are talking about how Clemson pulled off an amazing fourth quarter and last-second touchdown to beat Alabama. But there’s still one topic of conversation that hasn’t subsided — the Tide’s Offensive Coordinator.

Lane Kiffin joined the Alabama coaching staff in 2013 and spent almost three full seasons as their offensive coordinator. He was a key contributor in Alabama’s Championship in 2016 and to their success this season. That success earned Kiffin a head coaching job with Florida Atlantic University.

Alabama didn’t take long to name a new OC. The team decided to promote former USC coach Steve Sarkisian to the position. The plan was for Kiffin to finish out the season with Alabama, but after the team’s 24-7 victory over Washington in the first round of the playoffs, the team decided to let Kiffin leave for FAU early.

Steve Sarkisian has had alcohol issues in the past, and Head Coach Nick Saban was fully aware of these issues. However, Sarkisian is known to be a very good offensive-minded coach and Saban thought he could be a big help to the program. Part of the reason Sarkisian was hired was to help improve the team’s third down conversion percentages. During the regular season, Alabama finished in the top 25 in third down conversion percentage at just under 45 percent.  However, they only converted four of 14 third down plays against Washington, and a measly 13.3 percent in last night’s game. But how can a team expect to convert a high percentage of their third down plays if they have to go nine or ten yards on a majority of those plays like Alabama had to?

Nick Saban believed in Sarkisian, and when people look at the box score, the numbers will show that Sarkisian was ready to take over. After the loss, Saban commented on how he thought Sarkisian did with the small window of preparation.

Most teams would be more than happy scoring 31 points, but that doesn’t matter when you allow 35. A coaching change one week prior to the biggest game of the year would seem like an obvious reason why Alabama lost. But besides the third down conversions, the offense played well against Clemson.

The Tide didn’t win the College Football Playoff for a second consecutive year, but they are still the favorite to win it next year. Saban and Sarkisian will have an entire off-season together to recruit new players, and to develop the returning players. People will forget about the coaching change and Clemson will receive the credit they deserve.