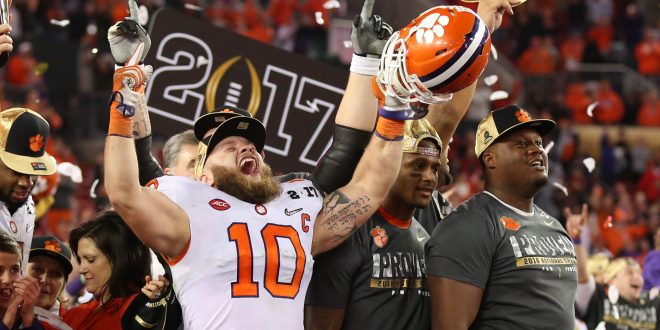 Alabama kept Clemson contained for the first half of the game. The Crimson Tide was first to get on the scoreboard after running back Bo Scarbrough scored back-to-back touchdowns in the first half to give Alabama a 14-0 lead. The sophomore back ran for 93 yards on 16 carries.

Clemson trailed by seven points after Deshaun Watson scored on a eight-yard carry.

In the third quarter, the Tigers made their way up the scoreboard, trailing by just three points after Hunter Renfrow scored on a 24-yard catch and run. Alabama losing Scarbrough late in the third quarter to a leg injury played a huge role in the outcome of the contest.

Clemson managed to pull ahead and get its first lead of the game at the 4:38 mark in the fourth quarter. The Tigers led 28-24 when Wayne Gallman scored on a one-yard run. Alabama, however, did not make it that easy for Clemson to win the title.

The Crimson Tide’s offense came back to life and responded with a wide receiver pass from ArDarius Stewart to O.J. Howard and a 30-yard touchdown run from Jalen Hurts. Hurts struggled to connect on pass attempts throughout the game, but in this moment he looked like he was trying to redeem himself.

30 yard TD for Hurts as Alabama retakes the lead!!! #NationalChampionship on ESPN https://t.co/4d9f079tC8

Watson says when he saw the time left on the clock after Alabama scored, he knew Clemson still had an opportunity.

With 2:01 remaining in the game when the Tigers got the ball, Watson completed a 24-yard pass to Mike Williams and a 17-yard pass to Jordan Leggett to put the Tigers in scoring position. Watson threw a two-yard touchdown pass to Hunter Renfrow and scored with one second left on the clock in regulation.

Alabama head coach Nick Saban says it was a hard fought game, but wishes he could have done more to win.

Last season, Clemson lost the championship to Alabama 45-40, despite Watson putting up 478 yards. This year, Watson felt the pressure from the Tide in the first half, but came back to the field with some confidence after halftime. He finished with four touchdowns and 420 yards.

Clemson head coach Dabo Swinney says Clemson could have sent the game into overtime with a field goal, but they were playing to win.