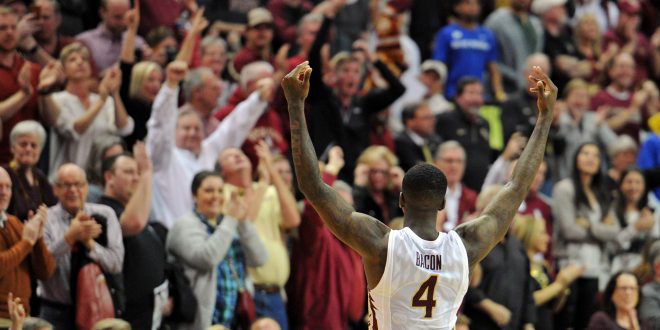 The Florida State basketball team can’t stop winning. After beating Duke last night, FSU now has a record of 16-1. The only Seminole blemish thus far has been a loss to Temple. With the toughest part of their schedule coming up, Florida State will look to continue their record-setting season and keep their win column on the rise.

The Seminoles are on pace to have one of their best seasons yet. Here are some of the historic moments they’ve captured for their program this year.

No. 9 FSU takes down No. 7 Duke for the 1st time since 2012, the largest Seminole victory over Duke in series history. pic.twitter.com/kOjOH31tPq

Florida State has built up an insane amount of talent over the past few years. While there are some standouts, players have all seen a decent amount of time on the court this season. Sophomore Dwayne Bacon and freshman Jonathan Issac have been solid all season for the Seminoles. However, junior Xavier Rathan-Mayes stole the show against Duke. He was explosive in the second half, where he scored 19 of his 21 points. Head coach Leonard Hamilton said the second half was really what propelled the team to victory. Xavier Rathan-Mayes said the atmosphere the home crowd provided was absolutely electric, and was also key for the Florida State win.

With their win over the Blue Devils, Florida State moved up three spots in the latest Top 25 poll. The Seminoles are now ranked No. 6, while Duke has fallen to No. 11. FSU is entering the toughest part of their schedule. Their next three games include ACC opponents North Carolina and Louisville, as well as Notre Dame. First up will be No. 12 UNC this Saturday in Chapel Hill.

Born and raised at the ballpark! Typically quiet- until it comes to sports. I'm a South Florida native with a passion for baseball nearly as strong as my faith. Grew up in garnet + gold, turned out sporting orange + blue. Likely to be found with a camera. And yes, I take food pictures.
@victoriarossman
Previous West Virginia Hands No.1 Baylor First Loss, FSU Wins 12th Straight
Next Patriots Extend Playoff Run To Eight