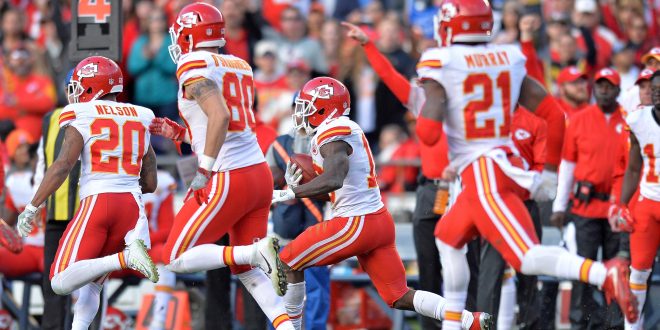 Kansas City Chiefs Head Into First Round of Playoffs

The Chiefs are looking for a redemption match after they got crushed 43-14 against the Steelers in Week 4. However, after the blowout, the Chiefs ended up winning the next 10 out of 12 games and clinched the AFC West division title. The Steelers had an advantage during Week 4 as the game took place in Pittsburgh.

Luckily for the Chiefs, this weekends game will be at the Arrowhead Stadium, a more difficult place for the Steelers to play. In order to defeat the Steelers, the Chiefs need to improve the performance of their defense. Last time they met, the Chiefs defense was lacking some key players such as Justin Houston, who will be back for this playoff game. However, unfortunately for the Chiefs, linebacker Derrick Johnson will be out of Sunday’s game due to an achilles injury.

The Chiefs offense also needs to be on their game this Sunday in order to prove themselves against the Steelers and take on their defense. Alex Smith needs to focus his attention during Sunday’s game to wide receiver Tyreek Hill, running back Spencer Ware, and tight end Travis Kelce. Throughout the 2016 season, Hill has had a total of 593 yards, 6 touchdowns, and led the NFL in punt return average during this regular season. Ware has a total of 923 yards, 3 touchdowns. Kelce is the leader of total yards with 1,125 yards this season and 4 touchdowns.

Fortunately, for the Kansas City Chiefs, the Steelers have numerous injuries leading into this divisional playoff game. Defensive end Ricardo Mathews, linebacker Anthony Chickillo, tight end Ladarius Green, and running back Fitzgerald Toussaint are all questionable for this weekends game.

NFL Media draft expert Mike Mayock believes everyone shouldn’t give up on Kansas City yet.

Sydney is a senior studying telecommunications with a specialization in sports media at the University of Florida. She is a multimedia sports reporter for ESPN 98.1 FM/850 AM WRUF and WUFT-TV.
Previous Barry and Stone Lead the Way in 80-76 Win Over Georgia
Next AFC Divisional Round Preview: Pittsburgh Steelers