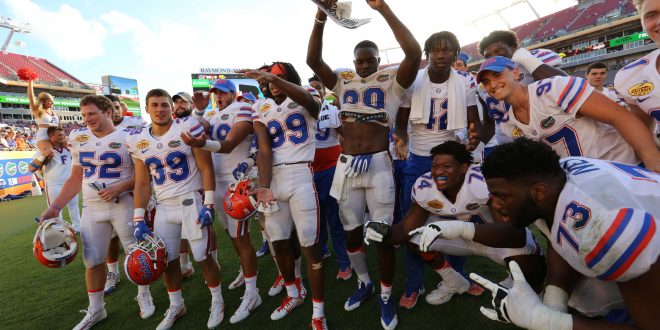 Gator football received a plethora of talent for 2017 Spring football, among them five new mid-year football players. All are freshmen and are officially enrolled at the University of Florida.

Kyree Campbell  finished his senior year of high school at Woodbridge High School, the same high school that produced Alabama tackle Da’Shawn and 1980s Gator Tony Lilly. He successfully finished his senior season with 62 tackles, eight sacks, four pass deflections, two interceptions and three blocked kicks. Campbell played in the 2016 Offense-Defense All American Bowl. In 2015, Campbell was named to the Virginia 6A all-state first team as a senior. As just a sophomore in high school, Campbell posted 12.5 sacks, leading the Freedom Eagles to the playoffs for their first time in school history. Before signing for Wyoming Seminary College Prep in 2016, Campbell attended Freedom High School in Woodbridge, Virginia.

Keymore Gamble is a 6’4, 216 pound athlete from Miami Florida. Gamble received offers from Florida, Cincinnati, Louisville, Miami, Temple, West Virginia and Wisconsin. In high school, Gamble helped bring the Spartans to the 2016 FHSAA Class 8A State Championship. Southridge started off the season 2-2, but won nine games in a row towards the state championship. In 2016, Gamble participated in the Opening Miami. He traveled with a 7-on-7 all-star football squad called WarZone and went to the Pylon 7 verse 7 National in Dallas the same summer. In 2015, Gamble notched 15 receptions for 184 yards and five touchdowns.

Kadarius Toney standing at 6’1 and weighing 180 pounds is an athlete from Blount and a 3-star recruit. Toney helped the Tornadoes makes the semi-finals in the 2016 FHSAA Class 4a State Championship and finish off the season with a 9-4 record.

Receiving offers from all of the following schools, Toney still chose Florida:

Toney said where he sees himself this upcoming season.

“They already told me from the meeting, saying I was going to play everything,” Toney said. “I’ve got a mindset to where anything will work for me. I’m not really too big on just one position.”

Will former Blount star Kadarius Toney get shot at quarterback for Florida?https://t.co/yyh49s5NgA

Throughout Jim McElwain’s first two seasons, freshman have continued to play an important roll. McElwain continues to recruit freshman and sees the potential in them.