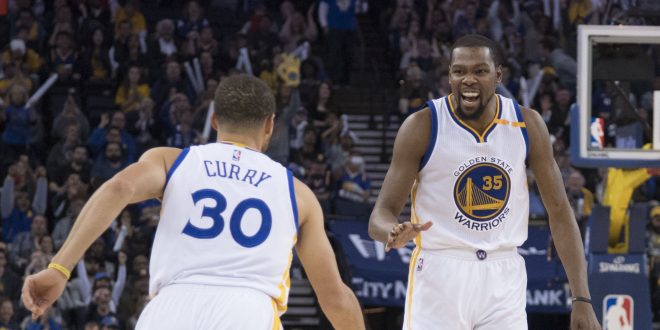 The Golden State Warriors got their revenge against the Cleveland Cavaliers last night in their second regular season match up of the season. The Warriors cruised to the end of the game with a 35-point lead over their Eastern Conference counterparts. The teams are now tied with one win a piece in their regular season record against each other.

For Golden State this season is about redemption and validation. After blowing a 3-1 lead to Cleveland last year in the NBA Finals, it was time to regroup for the Warriors. After the infamous signing of superstar Kevin Durant, the team geared up for a rematch on Christmas Day in Cleveland. However, LeBron James and Kyrie Irving showcased why they’re the most recent NBA Champions. Golden State would have to find their first victory against the Cavaliers at a later date.

From the tip, Golden State controlled the pace of the game early. Their offense was aggressive from the get-go, as they played with plenty of energy in front of their home crowd.

The history between these two teams always led to intense showings. Last night was no different. James was taking the ball up on a fast break. As he crossed half court, Golden State forward Draymond Green, who’s known for his extra physical play, looked like he clothes-lined James. Green would receive a flagrant, and tempers flared between the two teams. Green said the foul and the scuffle that ensued wasn’t important.

Despite the foul, Green finished with a triple double. He had 11 points, 13 rebounds, and 11 assists. He also added a steal, and 5 blocks to his tally.

The Warriors had plenty to feel good about from their offensive showing. But what’s notable from last night and may have an impact down the stretch is their effort on the other end of the ball. Their defense was disruptive and never allowed Cleveland to find their rhythm. James, known for ability to get his teammates involved, couldn’t orchestrate his offense to answer Golden State’s attack.

At the half the score was 78-49. James tried to be more aggressive in the second half, and attempted to take matters into his own hands. But Durant stifled James’ attempt to carry his team to victory. One highlight that could summarize James’ night was on one attempt to drive to the rim in the 3rd quarter. Blocking James is a tough task for even the best of defenders in the NBA. But Durant went up and denied James who looked helpless on offense.

Looking forward for the Warriors, Cavaliers

While many analyst look at Durant’s signing at Golden State positively, they noted the Warriors loss of depth and defensive focus. But last night’s performance proved the team can still match up with the best of offensive talent.

Additionally, players came off the bench and had a meaningful impact on the game. Guard Shaun Livingston came in and dropped 13 points in 15 minutes. While one-time NBA Finals MVP Andre Iguodala delivered 14 points, 3 rebounds and 5 assists.

The Cavaliers missed Kevin Love who didn’t play the second half due to lower back soreness. J.R. Smith continues to be out with injury and won’t return anytime soon. While last night’s loss was hard to watch, it would be of surprise to no one if the Cavaliers regained their form after the break heading into the playoffs.

But for the Warriors who are looking to redeem themselves, an emphatic victory over the reigning champs is a good place to start.