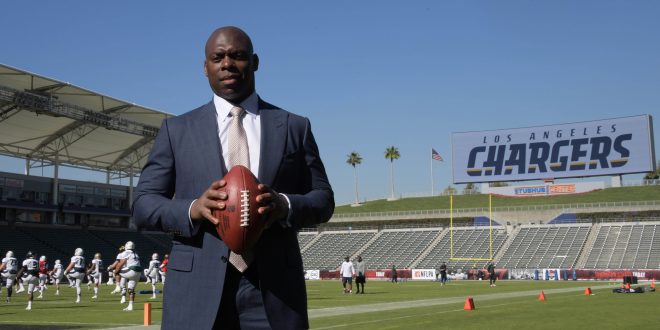 Former Buffalo Bills Assistant Head Coach Anthony Lynn will have quite the change of scenery moving from New York to Los Angeles. I don’t just mean the weather.  Lynn was the assistant coach under Rex Ryan until December, and took over as interim head coach when Ryan was fired. Before that, he was the assistant coach for the Jets. Neck injuries forced his retirement from the NFL before the year 2000.Before this, he had the chance to play for the Denver Broncos and the San Francisco 49ers. But the Chargers pose a new challenge.

The Chargers leave behind a tight community in San Diego. 56 years after their move from LA, many thought that they’d never have to go back. However, this new chapter for the team holds promises they never thought they’d hear. Having never won the Super Bowl, at least a playoff appearance is expected in the near future. Lynn is going to be the one responsible for fulfilling promises. When Lynn talks about winning, he’s confident – He’s not even worried about how the team will win, but rather, the amount of seats they have. The man has won two Super Bowls during his NFL playing time. It’s certainly not impossible for him to pull something like that off early on.

Lynn was picked to coach the new LA team through careful consideration. Many say he provides a strong running game and loves to run the ball. Others wanted him for his ability to create some of the best running backs in the league. Lynn was certainly happy to know that this was his new job.

Lynn has been described as a natural leader. But he says he’s not the main leader on the team. Phillip Rivers is the one that holds that title.

The 2017 schedule for the Chargers has not been revealed yet. However, some teams they are expected to play include the Cowboys, the Patriots, Broncos, Raiders and the Chiefs. The Bills are also expected to be thrown into the mix which will make for a good game against Lynn’s former team.