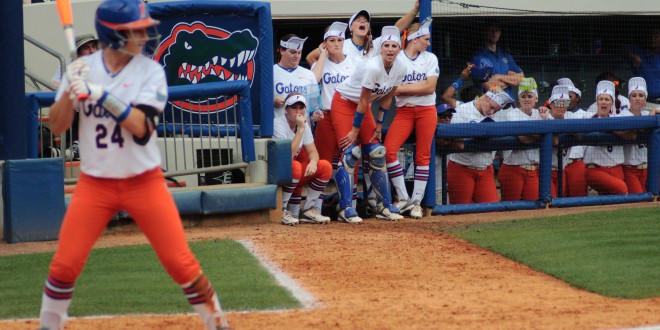 The Florida Gators softball team is projected to win the SEC for the third straight season.  The 13 SEC head coaches participated in the annual preseason poll to vote on who they believe will take the title.  The coaches awarded points on a 1-2-3-4-5-6-7-8-9-10-11-12 criteria and were not allowed to vote for their own team.  Florida received the majority of the votes with 141, followed by Auburn, and Alabama and LSU tied for third.  Auburn received two first-place votes and has won the last two SEC tournaments.

The rest of the vote breakdown is as follows: 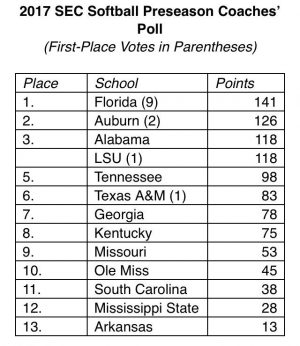 The Gators, who received nine first-place votes, return 14 letter-winners from last season’s team, including 2016 USA Softball Player of the Year Top 10 Finalist Delanie Gourley. Four of those returning are 2016 NFCA All-Americans.  Florida finished 56-7 overall and 20-4 in the SEC in 2016.  Their SEC record earned the Gators a sixth conference title, the most by any program in the conference.

Florida opens their season in Tampa at USF on Friday February 10 in the Wilson DeMarini Classic.  The Gators take the field first against Illinois State and finish the weekend with Michigan, Delaware, and St. John’s.

The Gators open SEC play at home against Missouri on March 11.

Previous Men’s Basketball Preview: Gamecocks vs Gators
Next “Steroid” Players Should Be in the Hall of Fame