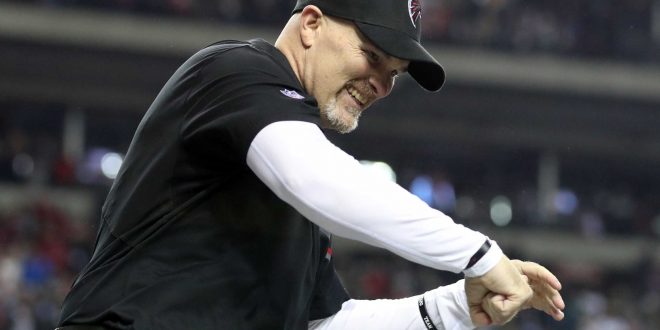 Dan Quinn Gets to Super Bowl

The Atlanta Falcons outplayed the Green Bay Packers Sunday night to earn their first Super Bowl appearance since 1999. Although this will be the Falcons first appearance since then, it is not Falcon’s head coach Dan Quinn’s.

Quinn has always been an asset on the Defensive side of the ball. As a Defensive Coordinator at the University of Florida the Gators became a top 10 defensive team under Quinn’s guidance.

Before Quinn joined the Falcons in February 2015 he served as the Defensive Coordinator for the Seattle Seahawks leading them to consecutive Super Bowl appearances.

In his first season as head coach, Quinn, led the Falcons to a 5-0 start, becoming the first head coach in franchise history to begin his career with five straight wins.

Fast forward to this year, Quinn coached Atlanta to an 11-5 regular season record and earned 1st place in the NFC South. Sunday night marked their biggest opponent of the year so far in the Packers. Quinn said he knew going into the game it would be one of their biggest challenges yet.

A challenge the Falcons did not back down from, pulling out a 44-21 win with help from QB Matt Ryan. Quinn said Ryan is in the middle of his career and hopes they will have many more super bowl appearances together.

The 51st super bowl is set for Sunday, February 5th and is sure to be the good game when the Falcons take on the New England Patriots.