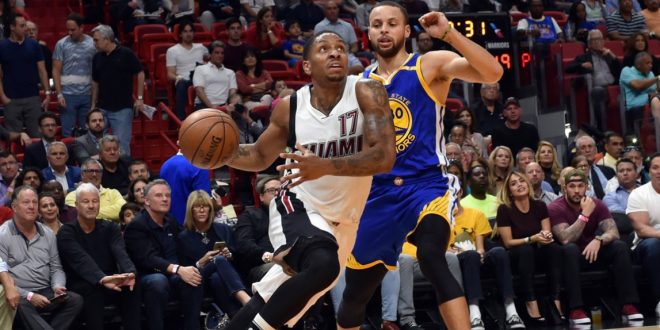 The game was tied with 10 seconds left on the clock and the ball was in Dion Waiters’ hands. He calmly carried the ball up the court, made a cross over step back move and took a deep three to lift the Miami Heat over the team with the best record in the NBA, the Golden State Warriors. Waiters flashed back to his childhood when he’d count down, 3, 2, 1, imagining he hit the game winner. He said it felt good just to see it go in.  Waiters’ game winner with .6 seconds left on the clocked capped his 33-point night and 11-point fourth quarter. The Heat shocked the Warriors with a 105-102 win.

"I love (being here). Miami has that energy. The fans are here every game supporting us giving us what we need." – DW#HEATisOn pic.twitter.com/dC4iyHIoR1

Waiters matched his career high with 33 points in his second consecutive game, the first time in his NBA career. He went 13-20 on the floor, and 6-8 in three pointers. He also posted five rebounds and four assists. After the game-winning shot, his team went wild and Waiter’s just struck a pose, arms crossed still standing behind the three point line.

Dion Waiters taking a three when he only needed two is the most Dion Waiters thing ever. And I love it. pic.twitter.com/tC54dz1QlZ

This was only the fifth game the Warriors have lost in regulation this season. Golden State still stands with the best record, 38-7. The Warriors shot just 46 percent from the floor and were held to their lowest scoring game since Dec.10. Durant had 27 point, Klay Thompson had 22, and Steph Curry had 21. The Warriors only lead by two at half time, and Miami went on a 12-2 run to start the third. Miami Head Coach Erik Spoelstra says you can see the team is gaining more confidence in close games and enjoy the competition of playing elite basketball teams.

The Heat will be back in action Wednesday as they travel to take on the Brooklyn Nets at the Barclays Center at 7:30 p.m. 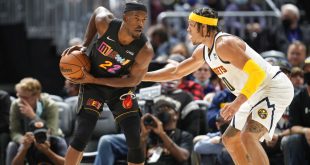