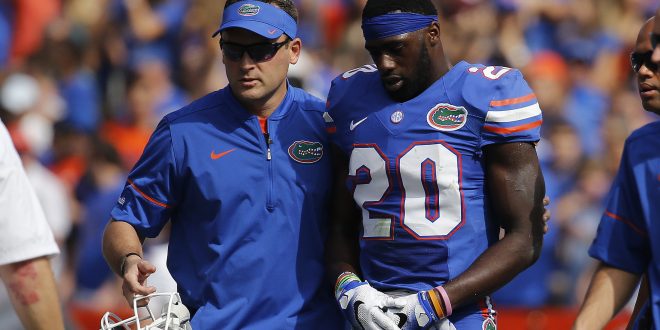 Marcus Maye Out For Senior Bowl

Marcus Maye is in Mobile, Alabama for the Senior Bowl but will not be playing in the game on Saturday.

Safety Marcus Maye suffered a broken arm in the win against South Carolina in November and missed the remainder of the season.

Maye said he will not be stepping on the field this weekend because he hasn’t trained or played in a game since his injury.

However, that isn’t stopping Maye from talking to numerous NFL coaches at the Senior Bowl. Maye said he has had interviews with teams since he arrived in Mobile on Wednesday.

“There’s a lot of talent out here all on one field,” Maye said. The Senior Bowl is filled with star players from all over the country who are able to step out on the field and compete against each other.

The next time Maye steps on the field will most likely be for a NFL team. But for now, the safety said he is enjoying this process and looking forward to playing again soon.

Currently, Maye is working out and finishing his rehab at a facility in Pensacola. He said is training with other football players who are also preparing for the next level.