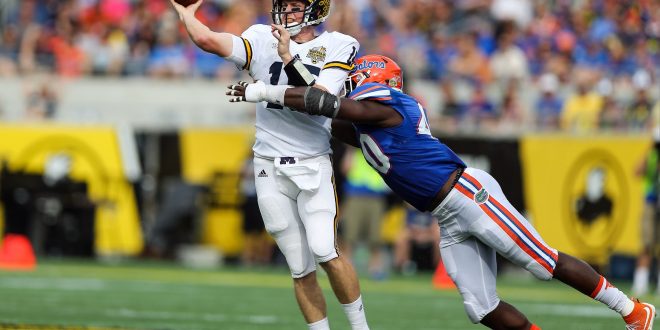 The defending SEC East champion Florida football team opens spring practice on Feb.28.  Coming off of a 9-4 season under second-year head coach Jim McElwain, the Gators will look to solve their offensive woes heading into 2017.

Making the choice to become a Gator was one of the best decisions I have made in my life. Come be apart of the family! @GatorsFB #NSD17 pic.twitter.com/XDHDY6oVHC

Those players will participate in UF’s Pro Day, scheduled for March 28.

Additionally, the team will also look to replace Defensive Coordinator Geoff Collins after he left for the head coaching job of the Temple Owls this off season.  Florida’s linebackers coach Randy Shannon is the lead candidate expected to fill the vacant coaching position.

Even with these losses, the Gators will enter the 2017 season as the defending SEC East Champion for the second consecutive year.  Florida lost the SEC Championship to the eventual National Champion runner-up Alabama Crimson Tide.  The Gators proceeded to route the Iowa Hawkeyes in the Outback Bowl behind the defense’s superior performance.

Elite 11 Finalist quarterback Jake Allen headlines the group of newcomers.  Shoring up the offense and quarterback battle is a top priority for McElwain and his staff.  Other significant recruits include OT Kadeem Telfort, DT Kyree Campbell, DE Zachary Carter, and CB Brad Stewart.  The Gator’s football recruiting class currently ranks 21st nationally and 7th in the SEC according to 247 Sports Composite Rankings with 17 recruits.

Heading in to next season, Florida is ranked 21st by ESPN, 14th by Sporting News, 21st by Pro Football Focus and 18th by SB Nation. They are unranked by CBS.

Important Off season Dates and Events

Sept 2: Season opener against the Michigan Wolverines in AT&T Stadium