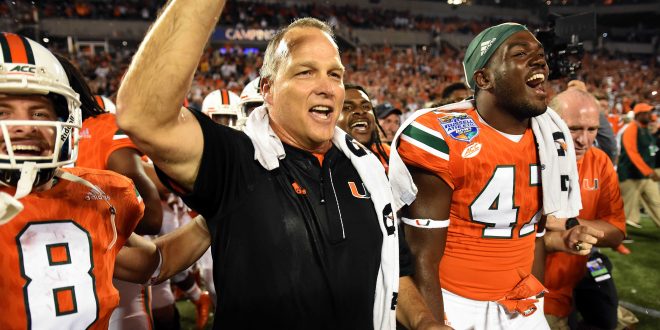 One top recruit Miami received yesterday was four star wide receiver, Jeff Thomas. According to Rivals, Thomas is the fifth best wide receiver in the country and second best player overall in Illinois.

Miami needed quarterbacks like N’Kosi Perry and Cade Weldon, especially after Brad Kaaya declared for the NFL Draft. The two 2017 QB recruits will battle for time to play this upcoming season.

Offensive Lineman, TJ Slaton was one guy who got away from the Miami Hurricanes. Instead, he signed with the Florida Gators.

Coach Richt says it’s difficult to keep other schools from poaching recruits out of Miami’s backyard.

Bleacher report ranked Miami’s 2017 class No.16 out of 25. Overall, yesterday was a great signing effort from Coach Richt.

Yesterday was amazing! Future is bright! Let's keep this momentum rolling! U Family!

Previous No. 15 FSU Gets Back on Track with Win Over Miami In College Hoops
Next Bulls Pull 18 Recruits