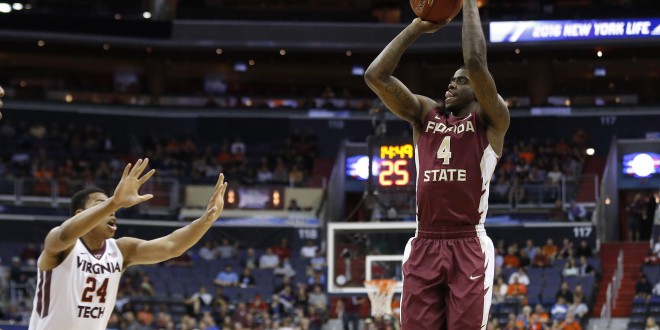 No. 15 FSU Gets Back on Track with Win Over Miami In College Hoops

In a Sunshine State showdown, FSU men’s basketball traveled to Miami to play Wednesday night. After a dominant performance in the second half, the Seminoles showed that they were back to playing the way they had- against some of the best teams- earlier this season.

In a game where FSU (19-4, 7-3 ACC) was in need of win, the team shot 52 percent from the field and went 14 for 15 from the free throw line. The leading scorers were Jonathan Isaac and Dwayne Bacon, each with 15 points. They defeated the Hurricanes with a final score of 75-57.

Tonight's crowd of 7,972 is a sellout! pic.twitter.com/gGib0awhHj

Before Wednesday, FSU was on a two-game losing streak, having lost to Georgia Tech and Syracuse- two unranked teams. The now 15th ranked Seminoles dropped nine spots in the AP Poll as a result of those losses.  Previously, FSU went 5-1 against ranked opponents and have proven themselves to be contenders in the ACC and the country once the postseason starts. This road win was a great bounce-back game as they proved that they could turn around from a poor performance.

In the first half of the game, Miami had the lead by as much as seven points and led at halftime 34-31. However, FSU was able to tighten up their defense and forced five turnovers in a 6:37 scoring drought for the Hurricanes. Once the Seminoles took the lead, they never looked back. FSU head coach Leonard Hamilton said nhis team was able to turn around their play and take advantage of opportunities in the second half.

Miami’s leading scorer was Bruce Brown with 17 points. In the second half, the Hurricanes were outscored 44-23. Although Miami (14-7, 4-5 ACC) just came off of an impressive home win against ninth ranked North Carolina last weekend, the young team is at risk of missing the NCAA Tournament if they do not improve moving forward.

FSU will be back at home this weekend in their next game against Clemson. That game will be on ESPNU at 12:30 p.m. on Sunday. Next for Miami, they will go on the road to play North Carolina State Saturday at 3 p.m.