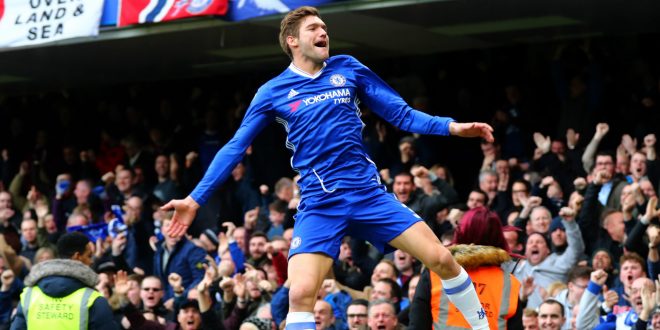 Chelsea continued their blistering run of form to open up their lead over Arsenal to 12 points in the table, and maintain their nine point lead over second place in the race for the title.

It was a typical sturdy defensive effort from Antonio Conte’s men in what’s now their signature 3-4-3 formation. They didn’t concede until a stoppage time consolation goal for Arsenal, when the game was well out of reach.

Marcos Alonso opened up the scoring in the 13th minute with his third goal in the past four games, and his fourth goal of the season. Pedro sent in a cross from the right wing, and found the head of striker Diego Costa. Costa’s header blasted off the crossbar, but a trailing Alonso beat Laurent Koscielny to the ball and headed in to give Chelsea the lead.

40 minutes elapsed before the match saw another goal, but what a goal it was.

Eden Hazard picked the ball up near midfield after a Costa knockdown header off a clearance. He then proceeded on a brilliant solo run, evading four defenders before slotting home a “goal of the week” contender. Koscielny whiffed on a tackle, and Coquelin was bodied off by Hazard which gave him the space to make the run.

IT'S A WONDER GOAL from Eden Hazard! The Belgian can't be stopped on his way to doubling @ChelseaFC's lead vs. Arsenal. #PLonNBC pic.twitter.com/I8rNJZXYrr

Cesc Fàbregas tacked on a third after a poor clearance from Arsenal keeper Petr Cech. The shanked clearance landed right at his feet about 10 yards out from the box, and he simply lobbed it over Cech to ice the game for the Blues.

Arsenal did pull one back in stoppage time, as Olivier Giroud’s header off a whipped cross from the left had too much pace on it for Chelsea keeper Thibaut Courtois. Courtois got a right hand on it, but the ball still deflected into the net.

Arsenal came into the game with a chance to cut Chelsea’s lead over them to just six points, but instead have fallen to fourth place, behind Tottenham and Manchester City. Pressure has started to mount on Arsenal manager Arsene Wenger, as it’s now two straight losses after their 2-1 loss last week to Watford, and seemingly another season without capturing the league title. Wenger has not captured the Premier League title since his “Invincibles” squad in 2003-04 that didn’t lose a single match.

Conte meanwhile, has no such hot seat that he’s on, as his team now looks destined to capture the trophy in his first season at the helm. They lead by nine points with 14 matches left, and have showed a consistency resembling that of their Premier League winning squad from two years ago.

Native New Englander. Follow me on Twitter: @jonacosta_10
@jonacosta_10
Previous Brady Cements Himself as “Greatest Of All Time”
Next Georgia Gearing Up for Gators