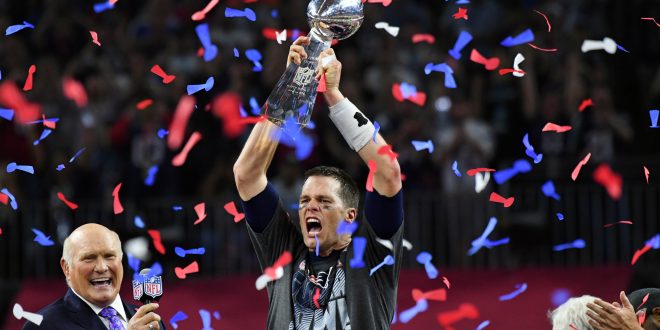 Brady Cements Himself as “Greatest Of All Time”

Let’s start with that. There’s no argument, no debate, no controversy. Tom Brady orchestrated the biggest comeback in Super Bowl history to defeat the Falcons 34-28 in OT.

One week ago, I wrote about the legacy that Brady and his coach, Bill Belichick, carved out through their six Super Bowl appearances together. Make it seven, with a fifth ring.

In case you haven’t seen the stats, Tom Brady broke Super Bowl records left and right. Brady now holds the record for the most yards (466), most completions (43), and largest comeback (25 points).

In addition to single-game records, Brady now stands alone with the most Super Bowl wins ever (5), passing Joe Montana and Terry Bradshaw. He was humbled when asked about being in a league of his own.

A fourth Super Bowl MVP at the age of 39 even led Brady to shake Roger Goodell’s hand. Goodell is of course the same commissioner who did everything possible to prevent Brady from playing this season.

“It was awesome.” Goodell uttered on stage with Brady, in one of the few statements made by the commish that most, if not all, football fans agreed with.

Tom Brady and Roger Goodell shake hands after the conclusion of #SB51. pic.twitter.com/n1j3mf82uE

Call it a Comeback

Coming into Sunday night, Tom Brady had trailed in every single Super Bowl he’d played in.

That trend continued in historic fashion as the Patriots were facing a 28-3 deficit in the third quarter. That was the point when Tom Terrific reeled off 31 straight points to carve his name in stone as the best to ever play the game. Brady was indeed able to win Super Bowl 51 in the first overtime in Super Bowl history.

Sunday marked Brady’s seventh Super Bowl appearance. It was also the sixth Super Bowl he’s played in that was decided with under a minute remaining. The finishes are as follows: 2 game-winning field goals, 2 game-losing Giants touchdowns, 1 game-winning interception, and now a game-winning touchdown.

Brady definitely makes it interesting every Super Bowl Sunday. This time around, we even saw a catch that arguably topped David Tyree’s remarkable grab in the 2008 Super Bowl.