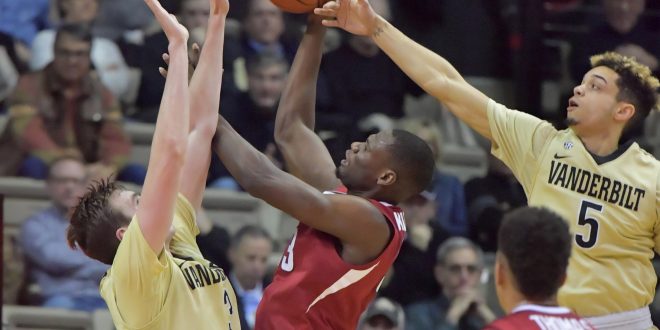 After losing to Arkansas by one point two weeks ago, Vanderbilt (11-12) is looking for redemption tonight.

When the two teams played on January 24th in Nashville, Arkansas left with the win 71-70. Tonight, Arkansas (17-6) is looking to leave with a clean sweep against the Commodores and Vanderbilt is looking for their fifth SEC win.

January’s game literally came down to the last second.

A 7-0 run sealed the win for the Arkansas Razorbacks in January. With :20 left, the Vanderbilt Commodores were up by two. Then, Arkansas guard Daryl Macon was fouled behind the three-point line with :01 left on the clock.

He only needed to make two to tie the game.

Macon made all three.

Despite these numbers, Arkansas Head Coach Mike Anderson does not think Tuesday night’s win will be easy if the Commodores continue to play good defense.

Both teams are coming off losses when they take the court on Tuesday night. The Razorbacks fell on the road to Missouri on Saturday, 83-78. Vanderbilt lost at home to Ole Miss, 81-74.

At the home in the Bud Walton Arena, Arkansas is 12-2 and has won the last three games at home.  Vanderbilt, on the other hand, is 3-4 on the road.

Dusty Hannahs leads the Razorbacks in points this season with 14.2 per game. It’s Matthew Fisher-Davis who leads the Commodores with 15.6.