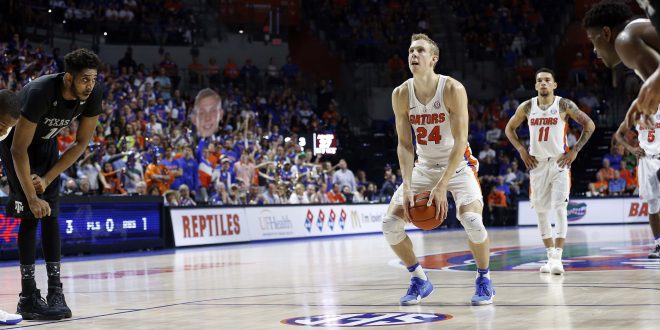 On a night where size truly mattered, John Egbunu was a veteran among underclassmen. The Florida Gators took down the Texas A&M Aggies, 71-62, on Saturday afternoon at Exactech Arena behind Egbunu’s first double-double of the season. The double-double was the first this season, as Egbunu finished with 11 points, 10 rebounds and 0 turnovers. Justin Leon finished one point shy of tying his career-high, as he recorded 18 points on 4-8 shooting from beyond the arc. Canyon Barry notched 12 points, despite knocking down only three of nine shots. Florida Head Coach Mike White credited the victory to the team’s depth, and discussed the importance of John Egbunu and Justin Leon in the victory.

Besides the poor night from the field, Barry passed Taurean Green’s streak of 37 straight made free throws. He has now made 39 consecutive under-hand shots from the foul line after going 4-4 from the charity stripe against Texas A&M. Egbunu also passed both Udonis Haslem and Andrew DeClercq on the UF all-time dunks list. He now has the seventh most slams in program history. After the game, John Egbunu discussed how the Gators broke down the Aggies’ zone.

For the Aggies, Tyler Davis, Admon Gilder and Robert Williams combined for more than two-thirds of Texas A&M’s points. Williams finished with a double-double, notching 18 points and 12 rebounds. Tyler Davis and Admon Gilder both had 12 points, while Davis added eight rebounds and a poor six turnovers.

The Gators outscored the Aggies in bench points, 27-6, but were outrebounded, 40-34. Both teams shot 39% from the field, but Florida had an 8% advantage from beyond the arc. Despite being the second best passing team in the SEC, Texas A&M had six fewer assists than Florida. The Aggies turned the ball over 20 times leading to 20 points for the Gators. Mike White credited Texas A&M’s zone for keeping the game close, and discussed the NCAA’s release of the current Top-16 teams in the NCAA Tournament field.

A John Egbunu slam from the left block got the game started and the crowd rocking. The dunk moved Egbunu up to eight on UF’s all-time dunks list, tying current Miami Heat power forward Udonis Haslem.

Justin Leon helped the Gators get off to a 9-5 lead with four minutes played in the first half. Leon had seven of Florida’s first nine points.

With ten minutes played, the Aggies put together a stretch of six made shots on eight attempted, diminishing the Gators lead to three. A KeVaughn Allen three-pointer with nine minutes remaining in the half, his first of the game, put Florida back up by six. Allen also had four assists in the first eleven minutes played.

A 14-3 run by TAMU would tie the game up at 27 with 1:16 left in the first half. After starting the game with three early turnovers, Admon Gilder would light up the O’Dome, notching a quick nine points.

Two Canyon Barry free throws would be the final points of the half as the Gators took a 29-27 lead into halftime. Admon Gilder led all scorers in the first half with nine points on 3-4 shooting, while Justin Leon led Florida with seven points. John Egbunu was fairly dominant during the first twenty minutes, going 3-3 from the field, good for six points. He also brought down five rebounds and committed no turnovers.

The Aggies committed 12 turnovers in the first frame leading to 11 points for the Gators. Florida was outrebounded, 18-15, in the first twenty minutes, but notched five more assists. Neither team could get anything going consistently from beyond the arc in the first half, as UF went 3-10, while TAMU shot 2-8. The Gators recorded nine bench points, while the Aggies got nothing from their reserves in the first frame.

Texas A&M took their first lead of the second half on a Tyler Davis jumper. The Aggies led 33-32 with four minutes played in the final twenty minutes. The basket was only Davis’ second make of the day.

Devin Robinson ended a near five-minute scoring drought on a free-throw line extended jump shot. Texas A&M took a timeout after the make, as the Gators pulled back within one point with 14:11 remaining in the second half. Robinson was 0-5 from the floor up to that point in the game.

Florida opened up the second frame just 2-13 from the field, while Texas A&M knocked down four of their first ten shots. The Aggies led 40-36 with 12 minutes remaining in the contest.

A Canyon Barry pump fake, drive and floater paired with a three-pointer from Justin Leon put the Gators up by two with just under ten minutes left in the game. Leon continued to find himself wide open from the top of the key.

A 17-5 run gave the Gators their largest lead since the first half, as Florida went up by eight with just under eight minutes remaining. UF made six straight shots during the run, breaking down Texas A&M’s 2-3 zone with perfection.

Chris Chiozza hit his first shot of the game with almost 36 and a half minutes played. That three-pointer gave the Gators their first double-digit lead since the first half with 3:32 left in the game. Chiozza was 0-3 from the field up to this point.

Texas A&M closed the game on a 6-0 run, but it wouldn’t be enough, as the Gators held on, winning the game 71-62. Florida will have two days off before taking on the Auburn Tigers at Auburn Arena. The Tigers are currently 16-8 under Bruce Pearl.