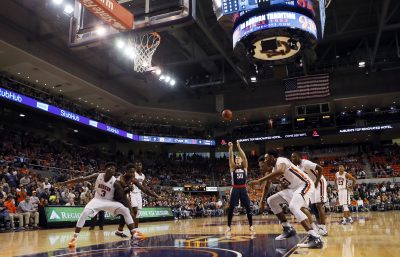 The Auburn Tigers are traveling to Oxford to play against the Ole Miss Rebels. This is big game for Auburn as they look to solidify their standing in the SEC conference.

The Rebels are 5-6 in the SEC standings with an overall record 14-10. With a home record of 9-5 compared to the Tigers of 5-3, this will be a close match up between the two teams.

Ole Miss is coming off a close loss from Wednesday night against Tennessee (75-66). The Rebels suffered from some critical turnovers towards the end of the game. With less than three and half minutes in the game, Ole Miss was in the lead when Breein Tyree lost control of the ball as he was trying to make a basket and went out of bounds. Soon after, Terence Davis traveled the next time the Rebels had possession.

Ole Miss falls 75-66 on the road to Tennessee. Saiz records his 17th double-double of the year with 13 points and 15 boards.

Davis ended the night with 14 points and Sebastian Saiz finished with 13 points and 15 rebounds.

Throughout the season, Saiz has been a powerhouse for Ole Miss in leading with rebounds at 11.6 boards and scoring 15.5 points per game.

The Tigers are coming off a great Victory against Mississippi State with the final score of 98-92 on Tuesday night.

Bryce Brown had a phenomenal game scoring 18 points and Mustapha Heron added another 17 points to help hold down a win for the Tigers.

“I don’t think anybody’s going to confuse Mississippi State or Auburn as two of the better defensive teams in the league but we do have some terrific players on both teams,” Auburn coach Bruce Pearl said in an interview with SEC.

However, Auburn has won three of their last four games despite the fact forward, Horace Spencer is out due to a shoulder injury.

The game will be at the the Pavillion starting at 6 p.m. and will be on SEC Network.