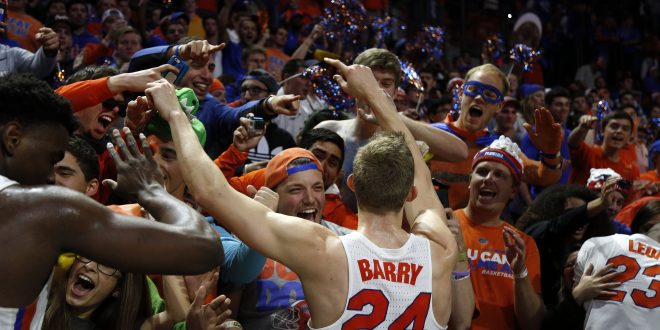 If you turned the game off at halftime to take your significant other to a night on the town, you might’ve missed the Gators’ best second half of the season. Florida took down the Auburn Tigers, 114-95, on Valentine’s Day on Tuesday night. Canyon Barry recorded a new season-high, notching 30 points on 8-of-17 shooting. UF completed 18-of-31 shots in the final twenty minutes while limiting AU to 15-of-33 in the second half. Florida’s 114 points set a school record for scoring in a SEC contest.

For the fourth straight game, a different Gator player led Florida in scoring, adding to the team’s narrative this season of “next man up.” John Egbunu left the game with 9:44 left in the first half after hurting his knee on a sharp fall and wouldn’t return, but the rest of the team would pick up the slack. Seven different Florida players, including Egbunu, finished in double-digit scoring on the night.

No. 15 Florida takes down Auburn!

The Gators' 114 points are the most they have scored in a game since 2000! pic.twitter.com/Iaa2CRBamb

Kasey Hill notched his second double-double of the season, finishing with 11 points and 12 assists. KeVaughn Allen scored all 17 points of his points in the second half. Devin Robinson recorded 14 points on 3-of-5 shooting from beyond the arc. Chris Chiozza ended with 11 points and four steals. John Egbunu and Justin Leon both had 10 points, but Leon added eight rebounds. Hill’s 12 assists propelled him to third on Florida’s all-time assist list. He now has over 500 career assists. Following the game, Florida Head Coach Mike White discussed Kasey Hill and the game overall, talked about Allen’s strong second half, commented on Canyon Barry’s best night at UF and gave an update on John Egbunu, while discussing his play on Tuesday night.

The Gators had their second best night of the season at the charity stripe, converting 37-of-42 shots at the foul line, good for 88.1 percent. Florida outshot Auburn, 56 percent-42 percent, from the floor, and 58 percent-29 percent from three-point range. The Gators shot 7-of-9 from downtown in the second half. UF’s bench outscored AU’s, 52-41, but were outscored in the paint, 50-34, largely due to Florida’s bigs getting into early foul trouble.

Florida just scored 64 points in the second half in a 19-point victory at Auburn. That is not a misprint. Gators roll to their 21st victory.

Auburn jumped out to a 10-4 lead with three minutes played, getting into transition swiftly off four quick Florida turnovers. Egbunu accounted for two of the turnovers after coming off of a double-double with no giveaways in the team’s most recent victory against Texas A&M.

The Gators continued to struggle early in the first half, finding them down six with 15 minutes remaining in the first frame. Canyon Barry’s free throw streak ended at 42 straight after missing the back end of a pair of free throws.

The Tigers continued to shoot the lights out of the gym, starting out 5-of-6 from beyond the arc. At the under-12 timeout, Auburn led 30-28, shooting 60 percent from the floor. Despite shooting 4 percent better than AU, UF’s five turnovers set them back significantly.

Florida pulled back within two thanks to the duo of Canyon Barry and John Egbunu. After a slow start including two turnovers, Egbunu went 3-3 from the floor and made four straight free throws. He had 10 points and four rebounds after ten minutes played, while Canyon Barry had 13 points on 2-of-3 shooting from beyond the arc.

An 11-0 run gave Florida their first lead of the game with 9:04 left in the first twenty minutes. A Justin Leon three-pointer was the shot that put the Gators ahead. John Egbunu was absent during the stretch after injuring himself on the defensive end.

Schuyler Rimmer was forced to come in with Egbunu injured and Hayes a bit tired. Florida built their lead to 40-36 with 5:34 left in the first half. Barry accounted for more than a third of the Gators’ points with 15 minutes played in the game.

Auburn ended the first half on a 10-4 run, tying the game up as the two teams headed to their respective locker rooms. Canyon Barry led all players in the first half in scoring, notching 19 points on 5-of-10 shooting from the floor. John Egbunu had 10 points and four rebounds but did not return in the first frame after injuring himself.

T.J. Dunans led the Tigers with 11 points in the first half. Danjel Purifoy was the only other Auburn player to finish with double-digit scoring in the first half, recording 10 points on only 2-of-3 shooting. Florida outshot Auburn in the first twenty minutes, 54 percent-40 percent, but their 10 turnovers were the difference maker in the game being tied at the half.

The Tigers grabbed one more board in the first half than the Gators, but had five more offensive rebounds, leading to 11 second-chance points. Florida went 16-of-18 from the free throw line, while Auburn knocked down 13 of their 17 attempts. UF had the advantage in bench points, per usual, outscoring AU’s reserves, 26-18.

A 6-0 run in the first 64 seconds of the second half, giving Florida a six-point lead, prompted Bruce Pearl to use his first timeout of the final twenty minutes. Layups by Canyon Barry and Kasey Hill, and a dunk by Kevarrius Hayes gave the Gators momentum right out of the gate.

KeVaughn Allen scored his first points of the game after over 23 minutes of play on a pair of free throws. On those two shots, the Gators took their first double-digit lead of the game, as they went up 63-53.

Florida built their lead to 15, their largest of the game up to that point, with 11:18 left in the contest. The Gators found themselves in huge foul trouble at the big man position then, with Hayes and Stone both with four fouls, Rimmer with three fouls and Egbunu out for the rest of the game.

UF built their lead to as large as 19 but led by 15 with just under four minutes left in the contest. The Gators would go on to win, 114-95.

Florida will have three days off before heading to Starkville to take on the Mississippi State Bulldogs for the first time this season at 2 p.m.

Previous SEC Basketball Preview: LSU versus Ole Miss
Next How Does the Serge Ibaka Trade Shake Things Up In the NBA Eastern Conference?