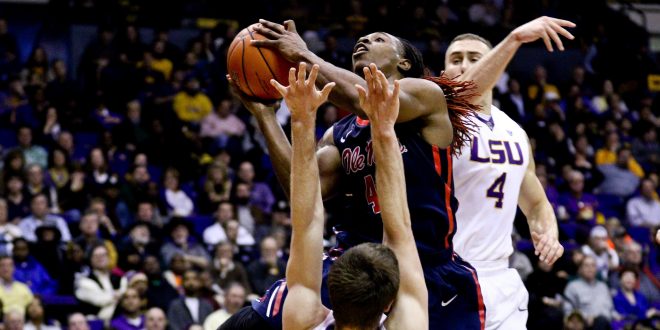 After the 11th loss in a row for LSU this season, the Tigers are back on the court against the Ole Miss Rebels. The Tigers are reeling from a 78-70 loss to the Razorbacks this weekend and try for a win tonight in Mississippi.

LSU is hoping to improve their 9-15 record, while the Rebels fight to continue their 15-10 record. In their last game on Saturday, the Rebels defeated Auburn in a close 90-84 game. With both teams coming off of close wins and losses, the Pavilion at Ole Miss should be rocking starting at 9 p.m.

Oh what a night it was… Ten years ago on Valentine's THIS happened. #BeatLSU pic.twitter.com/5pfBpbRYr5

What Happened Against Arkansas?

Heading into Saturday, the Tigers had beaten the Razorbacks seven straight times in Baton Rouge. The last time that the Razorbacks won was in 2008 at the Pete Maraviach Assembly Center with a final score of 68-52. So what happened this year?

LSU was successful in its rebounds by outdoing Arkansas 50-30. The Tigers had 18 offensive rebounds which lead to 21 points. The Razorbacks on the other hand only gained five points from offensive rebounds. Although LSU succeeded in this way, they were unsuccessful in their turnover rate. The Tigers committed 16 turnovers while the Razorbacks committed 12. These turnovers are what allowed Arkansas to gain a full 25 points and crush the Tigers.

Needless to say, this season has simply not been the best for LSU. In fact, this 11-game losing streak is the longest losing streak they’ve had in seven seasons. All but three of the losses have been in double digits as well.

The Rebels Secret Weapon to their “W” Against Auburn

As the second half of the Auburn versus Ole Miss game was underway, Ole Miss was down by 23 points. The Rebels needed a secret weapon to bring them back out of this slump.

Lucky for them, that charm was someone that had not used in the first half yet. The Rebels bounced back to defeat the Tigers with the help of guard Terence Davis scoring 26 points in the second half alone. Not only did Davis bring in the points that were needed, but he got six rebounds.

That's 10 straight over the Tigers! Like the WIN! #HottyToddy

Previous The Rock Lions: A Team Committed to Excellence
Next No. 15 Florida Takes Down Auburn 114-95 in a Tale of Two Halves