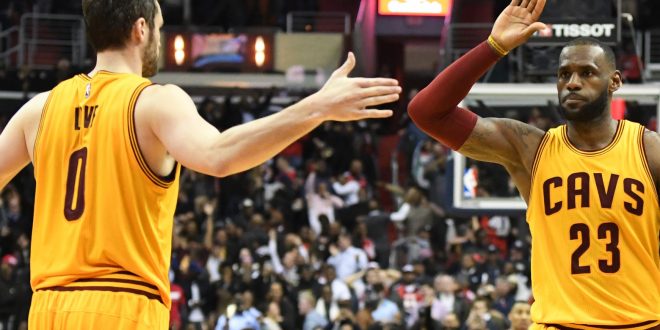 No Love In Cleveland

The Cleveland Cavaliers cannot catch a break recently as the injury bug has bitten the defending champs hard.

Following their 125-109 win over the Denver Nuggets Sunday, Kevin Love complained of soreness, which resulted in an immediate MRI. The results detected a “loose body” in his left knee. Love then underwent arthroscopic surgery to remove the loose body. Now, he will undergo a period of rehabilitation and is expected to miss approximately six weeks.

Having to adjust to playing alongside two superstars in the past three seasons, Love is having his best season since being traded from the Minnesota Timberwolves in 2014. He is averaging 20 points and 11.1 rebounds per game. It is his first double-double average in Cleveland. He is also shooting 38.4% from the 3-point line, which is another best since playing next to LeBron James and Kyrie Irving.

LeBron understands that he is even more responsible for the team’s tempo and success as they have been without J.R. Smith and now Kevin Love.

Injuries on the Cavs

While the significant injured players are J.R. Smith (thumb) and Kevin Love (knee), the injuries have piled up.

Smith’s substitution in the starting lineup, Iman Shumpert, suffered an ankle injury in their overtime game against the Wizards last week.

Meanwhile, the Cavaliers recently dealt Chris “Birdman” Anderson because of his costly ACL injury that was suffered in mid-December.

And we also cannot forget veteran guard Mo Williams’ dramatic exit. After undergoing surgery to remove bone spurs from the joint of the tibia and fibula in his left leg, Williams tied a controversial caption his Instagram picture back in October. The caption read, “Nobody and I repeat nobody actually gave a damn about my health but me.” The picture showed Williams in a hospital gown with an IV hooked to his right arm. This eventually led to him being shipped initially to Atlanta with Mike Dunleavy Jr for Kyle Korver. After a thread of actions, Williams was last added and waived by both the Denver Nuggets and Philadelphia 76ers.

Thus far, the Cavs have handled the hand dealt to them best as possible. However, the injury suffered by Love will be their biggest test this season.

The Cavaliers were able to get the 116-108 victory last night against Love’s old team in their first game without him.

Previous How Does the Serge Ibaka Trade Shake Things Up In the NBA Eastern Conference?
Next Kentucky Basketball Still in the Hunt