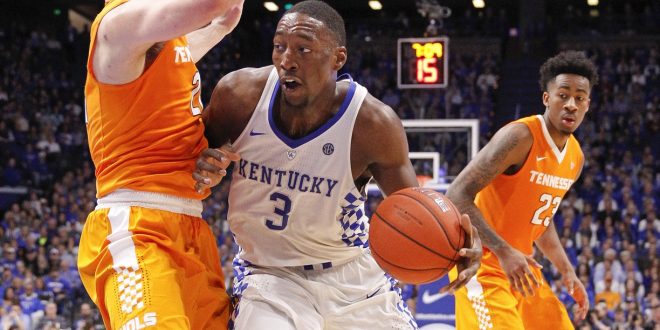 Kentucky Basketball Still in the Hunt

Kentucky came into this season just like they always do, making sure everybody feared the big blue. After their loss to Florida, John Calipari and his squad had to reassess. Changes had to be made fast. Their wins against Alabama and LSU were wins, but not by much. There was no blowout against LSU like everyone had hoped.

Finally, last night, they proved that they were capable of holding things together.

Tennessee is no Gonzaga, but they’re able to put up a fight, just like the rest of the Vol nation does. That fight didn’t last long. After the second half Tennessee’s chances of a comeback became more slim, and quickly faded away to non existent. Either way, it was due time for Kentucky to give a blowout game to someone, and they finally did it. Kentucky handed Tennessee 10 three pointers during the first half. This is where coach Calipari credits their success.

With stats like these, who needs to worry? Malik Monk had 20 points, Bam Adebayo had 12 rebounds, De’Aaron Fox and Isaiah Briscoe had 6 assists,  Isaiah Briscoe, De’Aaron Fox, Derek Willis all had 2 steals. Coach Calipari says there was some improvement.

Kentucky’s got problems guarding their side of the court, let’s be honest. If they can commit to themselves more often, those necessary defensive improvements will fix themselves. They also have Fox, which is arguably one of the best point guards around. Fox needs to step up now and help Coach Calipari lead the team.  Kentucky’s next match up is an SEC game against Georgia on Saturday night.