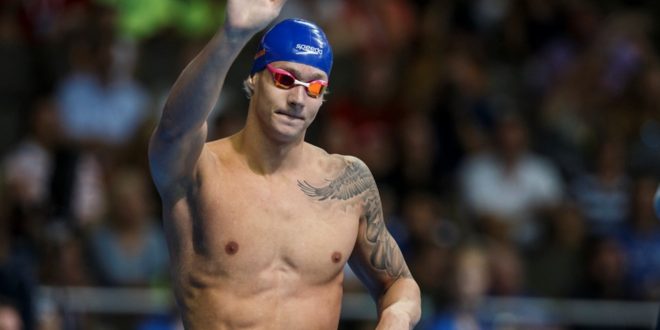 Even though swimming season is almost over, the SEC is hardly ready to dry off. The 2017 SEC Championship features high scores, smashed records, and former Olympians going for college gold. The first three days have concluded and some teams have proven dominant. But, close scores leading into the final two days give many others a shot at the podium.

Texas A&M led the pack on the first day, edging out the Florida Gators 188-165.5. However, standout performances from Olympian Caeleb Dressel and freshman Maxime Rooney put Florida at 759.5 points, giving the Gators a 200-plus point cushion on top of second place Georgia. This clear lead can mostly be credited to a stellar Day 3.

Florida men took first and second place in both the 100 fly and the 200 free. Georgia’s Chase Kalisz prevented the Gators from claiming first in all of their registered heats though. He took first in the 400 IM, beating former Gator Ryan Lochte’s record. But, Florida’s Mark Szaranek was only .33 behind him.

Florida men are not the only team with a decisive lead in the Championship thus far. Texas A&M women are secure with a score of 729 for the three days. Sophomore Sydney Pickrem, who swam for Canada in Rio, blew out the 400 IM with a 1.63 second lead. Her teammate Bethany Galat took second in the event. In the 100 fly, it was A&M senior Sarah Gibson who hit the wall first, giving her back-to-back titles. Claire Rasmus placed second in the 200 free, rounding out placement for the Aggies that day.

The Preliminary heats of Day 4 started at 10am and the Finals will begin at 6pm. Live results will be posted throughout the day. Day 5, the last day of the Championship, is tomorrow.