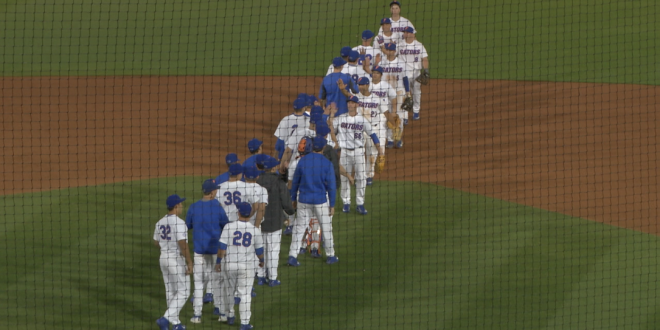 No. 2 Gator Baseball Opens Season With 5-4 Comeback Win over William and Mary

It wasn’t easy for the second-ranked team in the country, but the Gator baseball team used a two-run bottom of the seventh inning to come from behind and defeat the William and Mary Tribe 5-4 on opening night at McKethan Stadium.

Sophomore pitcher Michael Byrne earned the win for the Gators after coming in relief in the top of the seventh inning.  He tossed three scoreless innings and allowed only one hit. He faced only 10 batters, striking out four of them. Florida head coach Kevin O’Sullivan said Byrne was in great rhythm and is probably the reason for his team pulling out the win.

Reliever Nick Raquet took the loss for the Tribe, allowing two runs with one them earned over three innings of work. The Gators are now 6-0 all-time against the Tribe. O’Sullivan said it was great to get that first win in the first game of the season.

Despite a packed house to see a team with six preseason All-Americans, it was William and Mary that jumped out to the early lead. They tagged Florida starter and pre-season first-team All-American Alex Faedo for four runs in 4.2 innings, working his pitch count right from the beginning (87 total pitches) and forcing Faedo to take the no decision.

The first run of the game came via an unlikely source. William and Mary freshman outfielder Brandon Raquet, in his first collegiate at-bat, took the first pitch he saw from Faedo in the top of the second with two outs and no one on and sent it deep into left field. The ball went over the wall, and just like that, the Tribe were on top off of Raquet’s first collegiate swing.

Gator outfielder Nelson Maldonado tied the game up for Florida in the bottom of the third, scoring on a fielder’s choice on an infield ground ball from second baseman Deacon Liput, but the Tribe re-took the lead and extended it in the fourth and fifth innings.

In the top of the fourth, again it was Raquet having success against Faedo with two outs. He swung on the first pitch again, and this time singled to left field with two runners on base, driving home second baseman Cullen Large.

Large extended the Tribe lead to 4-1 in the top of the fifth. He faced Nick Horvath, who had just relieved Faedo with two runners on base. Large hit a line drive that Gator center fielder Blake Reese may have taken a bad angle on and the ball fell to a triple, scoring both runners.  William and Mary seemed to have Florida on the ropes, scoring in three of the first five innings.

Florida started its comeback in the bottom half of that inning, thanks to the bat of J.J. Schwarz. After Blake Reese walked and Dalton Guthrie singled to right field, the junior designated hitter walked up to the plate with two outs. Schwarz took a 2-1 count inside breaking ball and hit it opposite field, bringing home Reese and Guthrie, and keeping the Gators close after the Tribe had taken much of the momentum.

Headed to the sixth after the #Gators got a pair of runs on this JJ Schwarz RBI single. #GoGators

The bottom of the seventh saw William and Mary make a few key mental mistakes, which the Gators capitalized on to take the lead for good.

Florida’s Deacon Liput walked to start the inning and Jonathan India hit a routine ground ball to third baseman Zach Pearson, but his throw to first base was high and wide, allowing India to make it to first base and Guthrie to advance to third. On the next at-bat, Schwarz grounded out to the pitcher Raquet, but he bobbled the ball, allowing Guthrie to score before throwing out Schwarz at first.  India advanced to third.

The trifecta of mistakes concluded on the following at-bat.

Mike Rivera went up to bat, and Raquet’s first pitch to Rivera bounced past catcher Hunter Smith. Smith attempted to retrieve it and make the out, but India smartly slid in with his outside arm, his left arm, first, avoiding the tag and giving Florida an ugly, but deserved 5-4 lead. O’Sullivan said he liked the aggressiveness in India’s base running, saying he wouldn’t have been mad even if he’d gotten tagged out.

From there, Byrne carried Florida the rest of the way, facing just one more batter than the minimum as he threw 31 strikes on 38 pitches.  The second game of the series takes place Saturday at 4 p.m. and you can hear it live on ESPN 98.1 FM/850 AM WRUF.