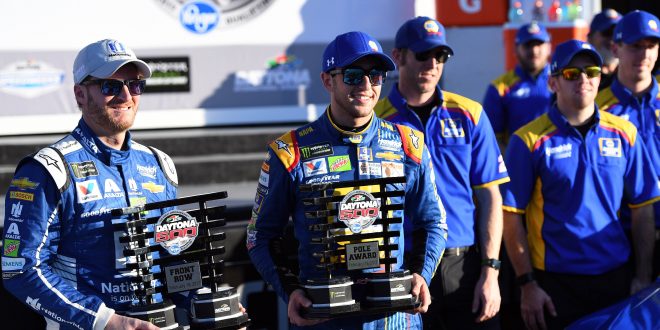 Like father, like son. Chase Elliot appears to be following in his dad’s footsteps after landing the pole at the Daytona 500 for a second consecutive year.

Your front-row starters for the #Daytona500. pic.twitter.com/NrVs2jmpBX

Son of hall-of-fame driver Bill Elliot, 21-year-old Chase Elliot and his crew seem to have Daytona International Speedway figured out.

After pacing both rounds of qualifying and bumping teammate Dale Earnhardt Jr. off of the provisional pole in the second session, Elliot didn’t feel bad about beating his teammate.

Elliot has big shoes to fill after being the successor to Jeff Gordon and the beloved No. 24 car for Hendricks Motorsports.

This is a familiar spot for crew chief Alan Gustafson, who has had the No. 24 Hendricks Motorsports car at the top spot for three years in a row.

However, the top spot doesn’t guarantee success in the Daytona 500. The last pole winner to win the 500 was Dale Jarrett in 2000.

Teammates At The Top

The front row is a familiar spot for Hendricks teammate Dale Earnhardt Jr.

Earnhardt has secured a spot in the front row of the 500 four times in his career.

Earnhardt seemed to be in good spirits after qualifying for the front row, even after getting knocked off the provisional pole spot.

This was Earnhardt’s first qualifying event after being away from racing after sustaining a serious concussion that sidelined him for seven months. This was his third concussion in four years.

Earnhardt has been cleared to begin competing again after participating in a medically-supervised test run at Darlington Raceway in December.

All eyes will be on the Hendricks drivers as they lead the start of the 59th running of the Daytona 500. The race will get underway this Sunday, February 26,  at 2 p.m.